Trayvon Bromell wins 100m in Gateshead ahead of Tokyo Olympics

American national champion Trayvon Bromell, won the 100m in 9.98 at the Wanda Diamond League meeting in Gateshead on Tuesday evening to re-establish himself as the favourite for gold at the upcoming Tokyo Olympics. 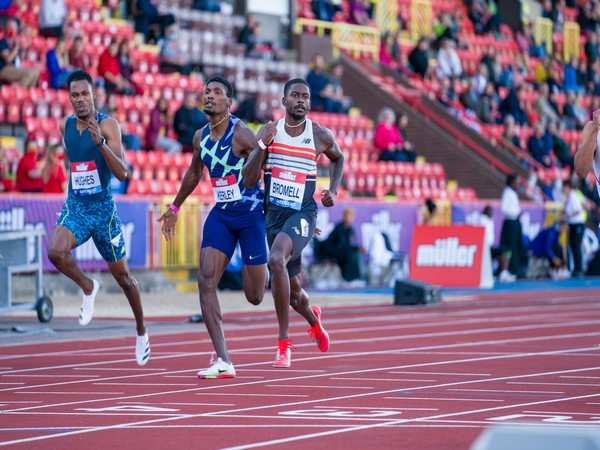 Gateshead : American national champion Trayvon Bromell, won the 100m in 9.98 at the Wanda Diamond League meeting in Gateshead on Tuesday evening to re-establish himself as the favourite for gold at the upcoming Tokyo Olympics.

Bromell, who holds the 2021 world lead, was the only man to go under 10 seconds at the Diamond League, the last major athletics meet ahead of Tokyo 2020. Britons CJ Ujah (10.10) and Zharnel Hughes (10.13) rounded out the top three, with Canada's Andre de Grasse and American Fred Kerley also timed at 10.13.

Bromell's first-ever Diamond League win was a highlight of an evening that also featured a meeting and Spanish record in the men's 3000m by Mohamed Katir and wins by Jamaican sprinter Elaine Thompson-Herah, Dutch hurdles star Femke Bol and German javelin thrower Johannes Vetter, as per the release by Diamond League.

The seventh Wanda Diamond League meeting of the season came just 10 days before the 23 July opening of the Tokyo Games and 17 days before the start of the athletics competition on 30 July. Bromell, who clocked a world-leading 9.77 in June and won the 100m in 9.80 at the US Olympic Trials last month, had finished a disappointing fifth in 10.01 at last Friday's Herculis EBS Diamond League meeting in Monaco.

In cool conditions in northeast England, Bromell regained much of the form that has made him the world's top 100m sprinter over the past two years. He burst quickly out of the blocks in lane five, surged to the front and led the rest of the way.

"I'll take that win and I really want to get back into training, get my body under wraps, recover and get ready for Tokyo," Diamond League quoted Bromell as a saying. "I want to be healthy and I'm blessed for that."

Tokyo will be the second Olympics for Bromell, who was carried off the track after injuring his achilles in the sprint relay at the 2016 Rio Games. "I just hope I'm making everybody proud and not just in chasing medals but in the sense of teaching people to keep fighting even when things are rough," he added.

The final event of the evening produced the meet's top performance when Katir clocked 7:27.64 to move to third on the European all-time list and 15th on the world all-time list, one place ahead of Eliud Kipchoge. It came just two months after Katir won the 5000m on the same track in Gateshead. And last week in Monaco, he set a national 1500m record of 3:28.76. Now Katir heads to Tokyo on an exceptional run of form. (ANI)