Activist and youngest Nobel Laureate Malala Yousafzai once again found herself in the middle of a controversy when social studies book showing her as a national hero of Pakistan was confiscated by government officials. 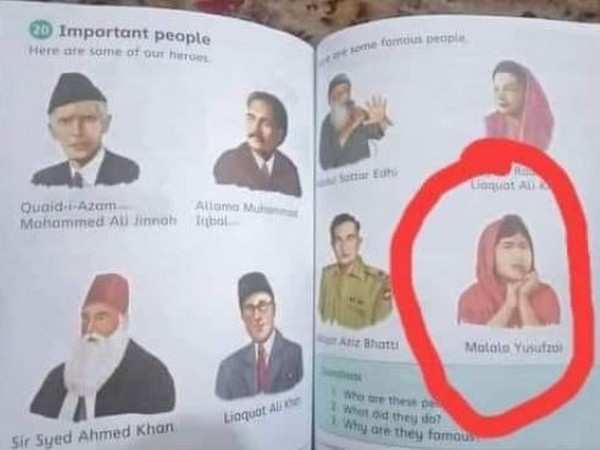 Islamabad: Activist and youngest Nobel Laureate Malala Yousafzai once again found herself in the middle of a controversy when social studies book showing her as a national hero of Pakistan was confiscated by government officials.

Punjab Textbook Board (PTB) confiscated the book that showed Malala's photo alongside that of 1965 war hero Major Aziz Bhatti, reported Naya Daur. It has confiscated the entire stock of the textbook published by Oxford University Press following a raid at the OUP office in Gulberg.

Defending its move, PTB officials said that the book was not issued a no-objection certificate (NOC), reported Naya Daur.

In order to target Malala over her views on Islam, Pakistan's private schools' association has launched a documentary 'I am not Malala'.

"The film highlighted what it called 'her controversial views on Islam, marriage and her pursuit of Western agenda', twitted Andy Rose from the unidentified handle.

The All Pakistan Private Schools Federation President Kashif Mirza said, "Through this documentary film 'I am not Malala', we will tell 20 million students in 200,000 private schools across the country about her controversial views on Islam, marriage, pursuing of Western agenda."

"The idea behind this is we want to expose Malala among the youth so they do not get impressed by her so-called story of the struggle for women rights," Mirza said at a press conference at his office in Gulberg.

Earlier in an interview with Vogue, Malala had expressed doubts about whether she would ever marry. Her remarks sent shockwaves in Pakistan - where citizens and politicians were panicked over what they saw as a threat to the institution of marriage - as 86 per cent of women over the age of 25 are married.

In the interview, when asked about marriage, Malala had said: "I still don't understand why people have to get married. If you want to have a person in your life, why do you have to sign marriage papers, why can't it just be a partnership?"

Malala's remarks did not go well with several religious and political leaders in Pakistan. They contended that life partnership was not allowed in any religion.

Yousafzai, who turned 24 years old on Monday, was the co-recipient of the 2014 Nobel Peace Prize for her battle against the suppression of children and young people and for the right to education. Only 17 at the time, Malala is the youngest-ever Nobel laureate.

Born in Pakistan in 1997, Yousafzai was shot in the head by a Taliban gunman at the age of 15 on her way back home from school in the Swat District.

She was targeted for speaking out about the plight of girls in her region, who were banned from going to school by the Taliban. (ANI)