The arrival of COVID-19 early last year - manifesting itself first in Wuhan, China - has stunned the world, but the People's Liberation Army (PLA) in China was quick to rebound. 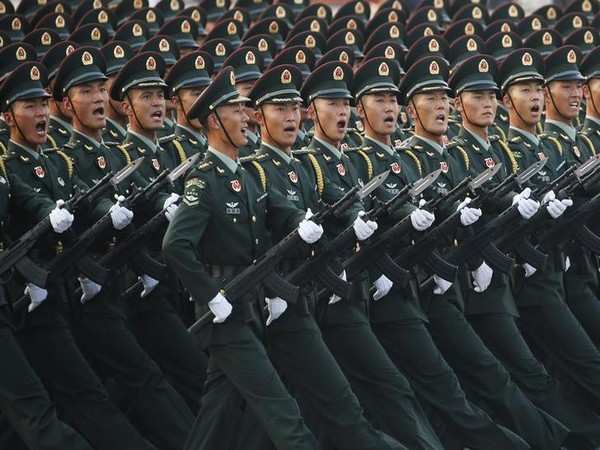 Hong Kong: The arrival of COVID-19 early last year - manifesting itself first in Wuhan, China - has stunned the world, but the People's Liberation Army (PLA) in China was quick to rebound.

Indeed, China attempted to utilize the pandemic to advance itself militarily, diplomatically and in terms of soft power, though often with less than stellar success. The PLA played an instrumental medical support role in Wuhan, attempting to halt the initial outbreak in early 2020. In January that year, Chairman Xi Jinping ordered the PLA to "shoulder its responsibility," and the military constructed the makeshift Huoshenshan Hospital in just nine days and deployed 1,400 personnel to man and run the facility.

COVID certainly did impact the PLA. It was forced to postpone military recruiting scheduled for the first half of 2020 in order "to support the country's epidemic prevention and control work," for instance. Naturally, China has never revealed how badly military production was hit by the coronavirus shutdown. The Jiangnan Shipyard, the nation's largest shipbuilding facility and which builds aircraft carriers and destroyers, extended its 2020 Lunar New Year holiday and advised workers who had recently traveled to stay home from work for 14 days.

Last year, Xu Guangyu, senior adviser to the China Arms Control and Disarmament Association, said that "while the virus will have an impact on China's weapons and equipment programs, it will be short term, as the virus is expected to only last for a few months at worst".

The prediction about the virus' duration turned out to be utterly wrong, but the first claim may well be fairly accurate, given the unabated rollout of new PLA equipment such as Type 094 ballistic-missile submarines and Type 075 helicopter landing dock ships, as well as rapid progress on the forthcoming Type 003 aircraft carrier. Various AVIC subsidiaries stated in February 2020 that they had resumed full production of aircraft after just a two-week stand down.

Furthermore, there have been no reports of mass infections in PLA military camps or aboard warships, but one can imagine that such news would be tightly controlled in any case.

Perhaps the clearest indication that the PLA lost little or none of its combat capability was the mid-2020 confrontation with India in Eastern Ladakh. While the Indian military was somewhat hamstrung by the pandemic, the PLA sought to take advantage and grab territory along the disputed border. China has not backed down there, and it continues to orchestrate frequent air and naval exercises in the South and East China Seas, as well as threatening Taiwan.

Another indication of the PLA Navy's undiminished operational tempo is the navy's counterpiracy task force in the Gulf of Aden, now in its 38th iteration. However, to suit the times, new protocols mean that Chinese warships no longer conduct port calls on these voyages. Consequently, these counterpiracy deployments now average three months long, compared to the 4-6 months for pre-COVID task forces.

Another instance of Chinese military activity is its undiminished contribution to United Nations (UN) peacekeeping missions. Among the five permanent members of the UN Security Council, China is the largest provider of peacekeepers. Beijing has contributed 40,000 troops to 30+ different missions since 1990, and currently around 2,400 soldiers are deployed. China contributes 15.22% to the UN's peacekeeping budget, trailing 27.89% of the USA.

Significantly, the PLA has always been part of China's arsenal of tools, and its unremitting activities over the past 18 months should be seen in that light. Military diplomacy remains a key goal of the PLA, the armed wing of the Chinese Communist Party (CCP). In a piece written for The Jamestown Foundation in the USA, Kenneth Allen listed four aims of such military diplomacy: supporting Chinese government diplomacy; shaping the security environment; collecting intelligence; and learning new tactics, skills and procedures.

Such diplomacy can occur via senior-level visits, dialogues, naval port calls, militaryexercises, functional exchanges and non-traditional security operations. But how has COVID-19 affected these activities? Allen noted that "the PLA has continued to engage in each category of military diplomacy, but the amount and types of engagements have decreased in some cases".

All senior PLA leaders, apart from the defense minister and the Central Military Commission chief of the joint staff, are limited by regulation to one trip abroad per year. Senior officers rarely visit the same nation twice. With the advent of COVID-19, China battened down the hatches, and the only military official to travel overseas has been Defense Minister General Wei Fenghe (to Indonesia, the Philippines, Hungary, Serbia, Greece, North Macedonia, Vietnam and Bangladesh on three separate trips). Nor has any foreign counterpart been hosted in China. Wei also heldphone calls with his equivalents in Russia, Cambodia, South Korea and the USA lastyear, with the topic typically COVID-19 response measures.

As for military dialogues, in 2020-21 these have been limited to the ASEAN Defense Senior Officials' Meeting Plus, the Xiangshan Forum, the 11th China-European Union defense and security policy dialogue, a 9th round of the China-India Corps Commander Level Meeting, a 12th round of consultations with Japan, and a friendship exchange with Vietnam. However, if COVID-19 gets under stricter control, we may expect the tempo of international visits to slowly increase.

There has been no multilateral exercise within the Shanghai Cooperation Organization since early 2020. However, China did participate in the International Army Games in Russia last year (a 78th Group Army brigade), the Shaheen air force exercise with Pakistan last December, and the multilateral Aman naval exercise in waters off Pakistan in February 2021 (this by a returning Gulf of Aden task force, followed by a passage exercise with Singapore). Incidentally, the PLA Rocket Force has never once conducted an international exercise.

Allen of The Jamestown Foundation concluded, "The PLA has continued to be actively engaged in military diplomacy since the first COVID-19 cases were confirmed in March 2020." He predicted that participation in exercises may also increase as the pandemic challenge declines. The PLA has been particularly prominent in COVID-19 relief deliveries, with the Chinese government and loyal media swift to trumpet every little activity. China has delivered vaccines and supplies to dozens of countries since the outbreak. The Ministry of National Defense prefaces each one with the statement: "For the implementation of President Xi Jinping's important declaration on making China's COVID-19 vaccine a global public good, with the approval of the CMC and at the request of the military of Country 'X', a batch of COVID-19 vaccines assisted by the Chinese PLA was delivered to the military of Country 'X' on Date 'Y'."

These supplies may be delivered via either civil aircraft or PLA transport plane. Sometimes these supplies might be earmarked specifically for foreign militaries. Meia Nouwens of the UK-based International Institute of Strategic Studies observed: "Publicly available data shows that COVID-19 military diplomacy began in March 2020, when the PLA sent protective equipment and clothing to Iran. In February 2021, the PLA began to donate COVID-19 vaccines to overseas militaries. The PLA's initial vaccine assistance to 13 countries globally fit within a wider vaccine-centric diplomatic effort by the Chinese government."

Nouwens continued, "Between March 2020 and April 2021, the PLA provided military medical assistance or donations to 56 countries around the world, and a UN peacekeeping mission. In all but two cases, the PLA's medical diplomatic activities were directed at countries belonging to the Belt and Road Initiative. Geographically, the PLA has mostly engaged with countries in the Asia-Pacific and Africa. The focus on the Belt and Road Initiative and South-South diplomacy also reflects China's wider diplomatic narrative and foreign policy objectives."

The PLA performs "military-political work" too, an integral effort to manage human capital and influence the civilian environment; this is in order to achieve the political and military objectives set by the CCP. It includes party functions (e.g. directing party organizations within the PLA, and imbuing CCP values and ethics among personnel); operational functions (e.g. supporting PLA warfighting, defending against enemy intelligence and coercing enemies to defeat their will to fight); and administrative functions (e.g. day-to-day operations like personnel management and officer selection).

Despite all efforts lauding its own generosity, China has experienced stiffening pushback during COVID-19, a black swan event that increased the speed of divergent Sino-US trajectories. Beijing has shot itself in the foot with its "wolf warrior diplomacy", as well as its vociferous deflection of all responsibility for the outbreak. At the same time, international attention has spotlighted what China is doing in Hong Kong and Xinjiang, the latter where more than a million Uighurs are incarcerated in concentration camps in what many label genocide.

Against this background, Chinese hubris has probably made more enemies than friends. Nonetheless, Beijing continues to exert diplomatic pressure - for example, it succeeded in getting Ukraine to stop supporting a Canadian motion at the UN censuring China for human rights abuses. Beijing threatened to withhold COVID-19 vaccines unless Kiev changed its mind, emblematic of its unashamed "bare knuckles" diplomacy.

Unsurprisingly, it is mostly developing countries that support China at forums like the UN, as these are the most vulnerable to Beijing's economic and diplomatic pressure. China is redoubling efforts to present itself as a benign and positive partner in world affairs, but this is at odds with its strident nationalistic policy. Such a narrative, a thinly disguised veneer, is failing overseas as Beijing more boldly throws its weight around. Typical of China's public-relations campaign, Hua Chunying, spokesperson for China's Foreign Ministry, recently tweeted on Twitter, an online platform banned for the mere masses within China, "It can be said that the CPC is not only blameless on human rights issues, it should also be awarded gold medals and medals."

In similar vein, Chinese Foreign Minister Wang Yi recently claimed a Chinese commitment to "upholding the international system with the UN at its core," and that "China has shared its wisdom and solution for world peace and development at every historical moment". Yet Jeffrey Feltman, a former UN undersecretary-general for political affairs, said that China has recently increased the use of its UN Security Council veto power, thus "downplaying human rights norms, playing up sovereign rights and vexing the United States". It often does so in coordination with Russia.

Representing this formidable nationalistic pride, on 1 July Chairman Xi Jinping warned, "The Chinese people will never allow any foreign forces to bully, oppress or enslave us. Whoever wants to do so will surely break their heads and bleed against the Great Wall of steel built from the blood and flesh of more than 1.4 billion Chinese people."

Xi's narrative is a simple but repetitive one, that only socialism could save China, and that only socialism can develop China. In his same speech, Xi said, "The party was chosen by history and the people." It is a narrative of historical inevitably, akin to what Beijing presents to the world in terms of China's inexorable rise and the USA's decline.

China's narrative about COVID-19, plus its innate desire to evade blame, means that the world will have to see through the lies and spin of Chinese propaganda campaigns. Indeed, the CCP even outrageously warns that the "political virus" (its term for anti-China rhetoric) occasioned by COVID is "more dangerous" than the pandemic itself.

At the heart of the CCP-PLA relationship is the party's absolute leadership over the military. Under the wider geopolitical shift occasioned by COVID-19, we should expect to see a continuing blurring of the divide between war and peace, of military and civil activity, as Chinese leaders leverage every conceivable facet of national power to shape the international environment. The PLA is part of Xi's overarching goals. (ANI)