NATO Secretary-General Jens Stoltenberg on Wednesday said withdrawing troops from Afghanistan is not a risk-free decision, but the alternative would be an open-ended military presence to withstand growing Taliban violence. 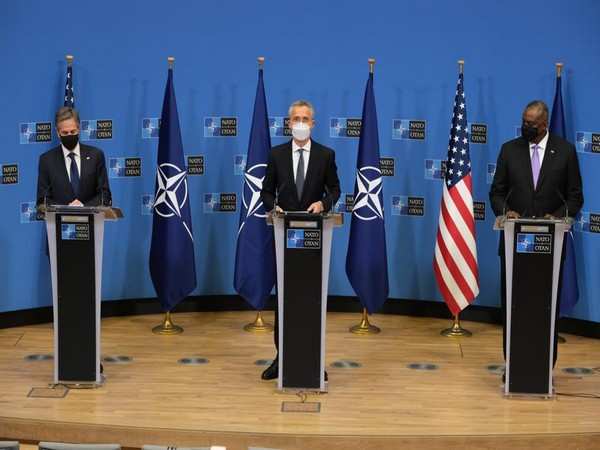 Brussels [Belgium],  NATO Secretary-General Jens Stoltenberg on Wednesday said withdrawing troops from Afghanistan is not a risk-free decision, but the alternative would be an open-ended military presence to withstand growing Taliban violence.

"This is not an easy decision, and it entails risks. As I have said for many months, we face a dilemma. Because, the alternative to leaving in an orderly fashion is to be prepared for a long-term, open-ended military commitment, with potentially more NATO troops," said Stoltenberg at a joint press conference with US State Secretary Antony Blinken and Pentagon chief Lloyd Austin.

Speaking at the same press briefing, Austin said the United States will respond forcefully to any Taliban attack against US forces and allies during their withdrawal from Afghanistan.

"We will respond forcefully should the Taliban attack any of our forces or those of our allies during this drawdown," Austin was quoted as saying by Sputnik.

He further said there is still too much violence in Afghanistan and the Taliban is expected to try to reverse some progress made in the country over the last nearly 20 years.

Blinken, who was also present at the presser, said that the United States remains committed to continuing supporting Afghanistan after the withdrawal of its troops and would include a provision of visas for asylum-seekers under a Special Immigrant Visa Program.

"We have a commitment, especially to those who worked with us, who helped us whether it was our military, our diplomats, and we have a program that you are all aware of, that so called Special Immigrant Visa Program that they (Afghan people) will be eligible for, and we are certainly committed, if there is a demand for it, a request for it, to move forward on that," Blinken said.

Blinken pointed out that the United States military withdrawal from Afghanistan will not end its commitment to the country's development, humanitarian assistance and security forces.

Earlier today, US President Joe Biden announced that the United States will begin withdrawing its 2,500 troops from Afghanistan by May 1 and hope to be completely out of the country by September 11. (ANI)