Islamabad [Pakistan], June 8 (ANI): The death toll from the train collision in Pakistan's Sindh province reached 62 on Tuesday as rescue operations ceased and the track was restored. 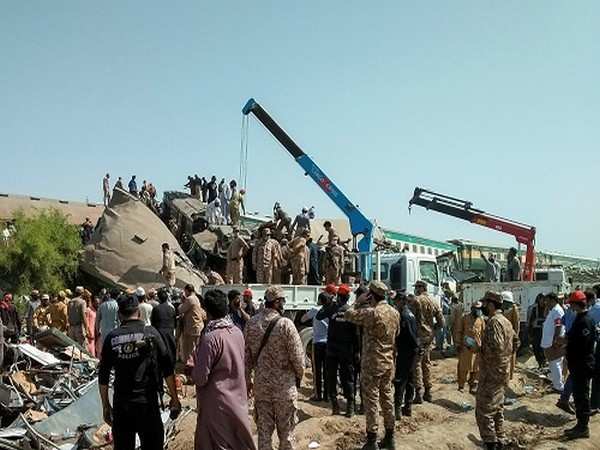 Islamabad [Pakistan], June 8 (ANI): The death toll from the train collision in Pakistan's Sindh province reached 62 on Tuesday as rescue operations ceased and the track was restored.

"The up and down track has been restored; have received orders to resume train service," Sukkur Tariq Latif, Divisional Superintendent (DS) Railway, was quoted as saying by The News International. The track had been closed for 27 hours.

The accident occurred after the coaches of one train, the Millat Express, derailed and fell across the opposite track, where they were hit by another train, the Sir Syed Express, Geo News reported citing a spokesperson for Pakistan Railways statement.

The report further said the engine of Karachi-bound Syed Express and four coaches derailed as a result of the accident. Now, the experts are busy retrieving data from the black boxes of both trains.

On Monday, Prime Minister Imran Khan had expressed shock at the loss of lives from the Ghotki train accident and ordered a "comprehensive investigation" into the incident.

"Shocked by the horrific train accident at Ghotki early this morning leaving 30 passengers dead. Have asked Railway Minister to reach the site and ensure medical assistance to the injured and support for families of the dead. Ordering a comprehensive investigation into railway safety fault lines," he tweeted.

Indian High Commission in Pakistan had also expressed grief over the train accident in Ghotki,

"We are saddened at the tragic train accident that took place in Ghotki, Sindh today morning. We offer condolences to families of the deceased and wish speedy recovery to the injured," Indian High Commission in Pakistan said in a tweet on Monday. (ANI)