6 Bahá’í homes destroyed and 20 hectares of land confiscated by Iranian government agents, Who are Baha'is?

Why are the Baha’i linked to Israel? 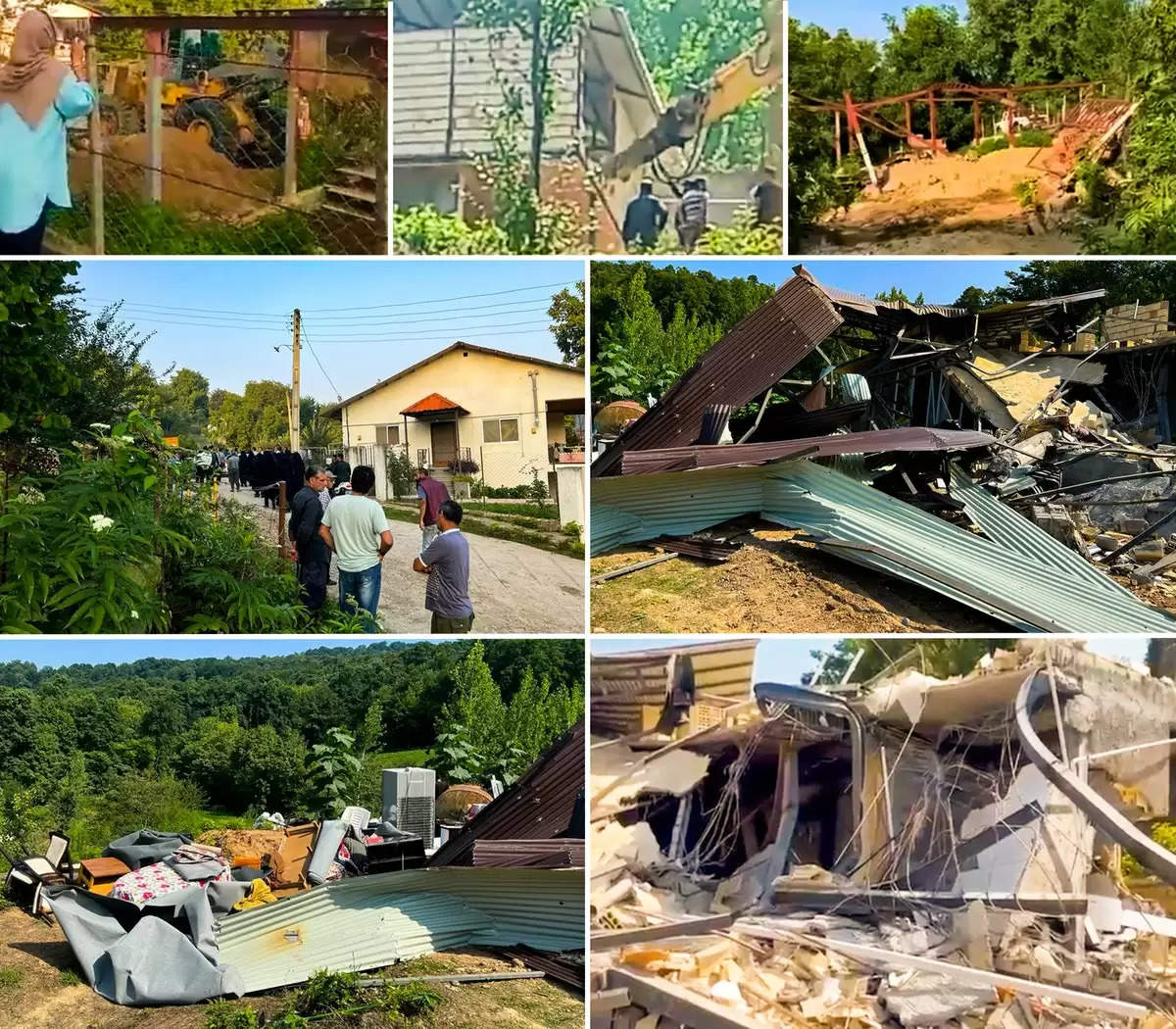 Some 200 Iranian government agents destroyed six homes and confiscated over 20 hectares of land belonging to Bahá’ís in the village of Roushankouh, in Mazandaran province, the News Service has learned.

Iranian officials have stepped up the persecution of the banned Baháʼí faith for alleged links to Israel. In recent weeks, they have raided a Baháʼí village, demolished several homes and arrested dozens belonging to the Baháʼí minority.
Iran’s intelligence ministry said on Monday that many belonging to the Baháʼí community were arrested but did not provide any further information on how the arrests were made or the number of people that were arrested.

This crackdown comes after the Islamic Republic faces international pressure over its tattered nuclear deal. Iran’s intelligence ministry said in a statement that the suspects were linked to the Baháʼí centre in Israel and had collected and transferred information to the region.
The Baháʼí community has demanded their release and has cited the long pattern of their peoples’ persecution by the Iranian Shiite theocracy, with this arrest being another one to join that list.

Breaking: Further to Sunday's rampage up to 200 #Iran-ian government agents have rounded up the Baha’is in the village of #Roushankouh & taken their mobile phones to avoid filming. They have heavy earthmoving equipment & are proceeding to demolish the Baha’i homes. #ItsTheirLand pic.twitter.com/l6SVEFptND

What happened?
The Baháʼí International Community has taken to Twitter to release a string of statements and videos that reflect the persecution they are experiencing from Iranian officials. According to them, 200 Iranian officers have sealed off the village of Roushankouh in Mazandaran province, which hosts a large Baháʼí population.
They have sealed off several other homes and demolished others. Those who pulled out their phones to record the unfolding events had their devices confiscated. Many others were told to remain in their homes and refrain from taking pictures or videos.
“Further to Sunday’s rampage up to 200 Iranian government agents have rounded up their Baháʼís in the village of Roushankouh & taken their mobile phones to avoid filming. They have heavy earthmoving equipment & and are proceeding to demolish the Baháʼí homes,” the Baha'i International Community tweeted.
Diane Ala’i, a Baháʼí International Community’s Representative, told the United Nations, “Every day there has been fresh news of persecution of the Baháʼís in Iran, demonstrating unmistakably that the Iranian authorities have a step-by-step plan that they are implementing. What will be next? The international community must act before it is too late.”
Iran has, until now, not offered any evidence that supports its allegations of the Baháʼí being linked to Israel or doing anything else that is illegal.
Who are the Baháʼí and why are they being persecuted?
During the 200-year-old history of the Baháʼí faith, members of its community have repeatedly endured persecution from the Islamic government in Iran.
The Baháʼí faith first came about in 1844 when the religion’s first prophet, the Báb, had a spiritual revelation in Shiraz, Persia. The Báb and the religion’s central prophet, Baha’u’llah, spoke of the Baháʼí faith as the newest iteration of an age-old world religion. The followers believe that all religions must be viewed as one capsule that is trying to bring about a positive change in humanity. Their overall message of unity promoted equal access to education, the right to religious freedom and the equality of all people.
But along with all the measures they undertook, the Baháʼí community’s persecution hasn’t gone unnoticed. It started at the time of its foundation itself when six years after the Báb’s revelation, the Islamic clergy and government executed the Báb. Along with him, around 20,000 of his followers were also murdered.
Persecution has continued today since the time of Iran’s Islamic Revolution in 1979. In 1980, all the nine members of Iran’s National Spiritual Assembly were abducted. In 1983, it became a criminal offence to organize as a leader of the Baháʼí and conduct activities related to the Baháʼí community in Iran. In 2013, Iran’s Supreme Leader Ali Khamenei urged Iranians to avoid all dealings with the Baháʼí. For nearly 40 years now, Iranian Baháʼís have lived without any national leadership and under constant threat and danger.
The Baháʼí faith is the largest religious minority in Iran. Despite this, they have never been formally recognized by the Islamic government. This could be because the Islamic state perceives the Baháʼís as a prominent political threat since it is a widely practised religion.
Baháʼís Israel connection
The Baháʼís have long been connected to Israel, although the allegations Iran is posing against them currently have not been confirmed. The Baháʼís international governing body, the Universal House of Justice, has been based in Haifa, Israel, for a long period of time. In fact, the Baháʼís had developed their presence there before the State of Israel was even founded.
Israel forms a large portion of the Holy Land, an area considered to be sacred for other religions such as Judaism, Christianity and Islam, as well. The Baháʼí religion came to Israel when Baha’u’llah kept constantly being banished from different places and finally landed in the Israeli city of Akka. Baha’u’llah is also buried on the outskirts of Akka, thereby making this place the holiest place on earth for the Baháʼís. Amidst tensions between Iran and Israel, the Baháʼí community is bearing the brunt of it. But the stories of their persecution have lasted for several years.