Will have idea of what scores are going to be ideal in T20 WC by watching IPL: Boucher

South Africa head coach Mark Boucher feels the Proteas side would "probably be playing" the upcoming T20 World Cup in similar conditions as that of in the Caribbean. 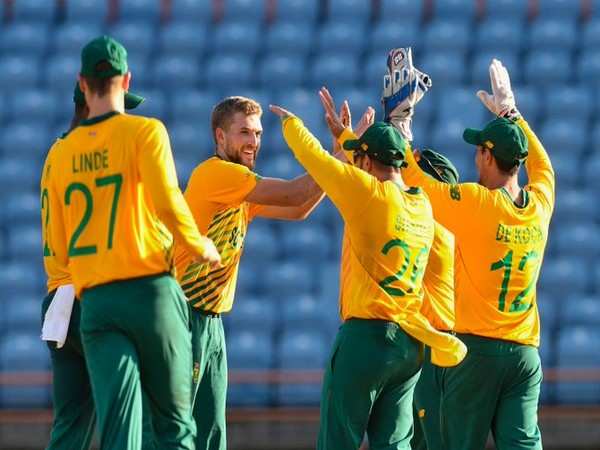 St George: South Africa head coach Mark Boucher feels the Proteas side would "probably be playing" the upcoming T20 World Cup in similar conditions as that of in the Caribbean.

South Africa defeated West Indies in the T20I series 3-2 on Saturday after registering a 25-run victory over the hosts.

"We are probably going to be playing in conditions like this in the UAE. The wickets after the IPL are going to be a bit dry," ESPNcricinfo quoted Boucher as saying.

"It's not the same as we're used to back in South Africa where you can go out and bash your way to 180 to 200 runs. You've got to be skillful here; you've got to be smart," he added.

Boucher said teams will have an idea after the conclusion of the Indian Premier League (IPL) as to what is a par score in the UAE for the upcoming T20 World Cup.

"It's going to be tough to bat on especially at the back end, like we saw here. We will have an idea of what scores are going to be by watching the IPL and then taking a look and assess how the wickets are playing during the beginning part of the World Cup. I suspect spinners will play a massive role," said Boucher.

The South Africa coach hopes the players who are going through a lean patch regain form in the upcoming series against Ireland.

"If we can get all the guys firing on all cylinders, we've got an idea of what could be our strongest line-up and once that happens, then you end up finding an extra 15-20 runs which, in these conditions it becomes a very difficult total to face, especially when it's so dry," he said.

The upcoming Men's T20 World Cup 2021 will be staged in the UAE and Oman due to the ongoing COVID-19 situation in India. The tournament will start two days after the IPL 2021 final -- October 15.

The BCCI will remain the hosts of the event, which will now be held in Dubai International Stadium, the Sheikh Zayed Stadium in Abu Dhabi, the Sharjah Stadium, and the Oman Cricket Academy Ground, from October 17 to November 14, 2021. (ANI)