New Delhi [India], July 15 (ANI): The Indian women's hockey team defender Gurjit Kaur, who has played 87 matches for the national side, is all set to represent India in the Olympics for the first time in her career. 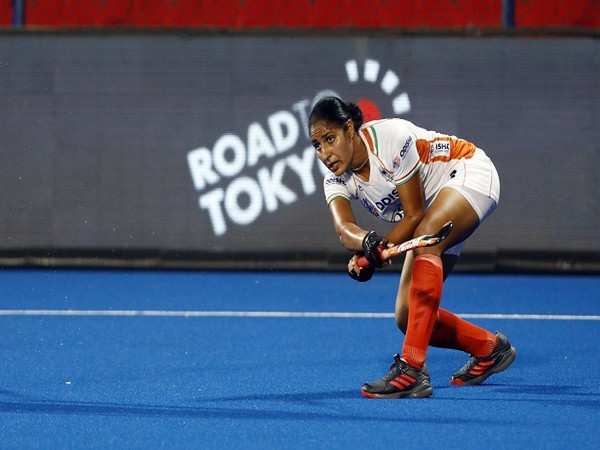 New Delhi [India], July 15 (ANI): The Indian women's hockey team defender Gurjit Kaur, who has played 87 matches for the national side, is all set to represent India in the Olympics for the first time in her career.

The defender expressed that the Tokyo Olympics is a great chance for the Indian women's Hockey Team to create history.

"When you play with the Indian team, you have to start thinking about not just your game but also how you can carry the other players forward. And the way we are playing right now, it's a great chance for us to create history," said the 25-year-old in a Hockey India release.

When asked about how she started playing the game of hockey, Gurjit said, "I was born in a farmer's family in Miadi Kalan in Amritsar. Leave alone playing, the name Hockey was even alien to my family. My sister - Pradeep and I had spent most of our early years in a private school close to our village.

"We then moved to a boarding school in Kairon which was around 70 kilometres from our home. It was here where my sister and I got a chance to try something new, Hockey.

"I knew nothing about the game so the whole day I used to just watch the other girls play. And that made me want to play the game. That's how I took baby steps to get accustomed with my newfound passion," she added.

Gurjit further expressed how the art of drag flicking helped her cement her place in the Indian team after making her Senior Team debut in 2014.

"Drag flicks are an indispensable part of modern-day Hockey and drag flicks are something that helped me cement my position in the National side. It wasn't until the tour of Europe in 2017, where I had the opportunity to work with Toon Siepman," said Gurjit.

"He has trained Hockey greats like Sohail Abbas and Mink van der Weerden. He taught me almost everything about drag-flicks. He asked me to change my technique a little bit, and that has helped me to improve my game tremendously," she added.

Gurjit said that she has always tried to contribute as much as possible to the Indian team's progress throughout her career.

"After I started playing for India, I played in the Series in Canada, Hockey World League Round 2 as well as the semi finals in 2017. Be it the 2018 Asian Games where we won the Silver medal or the FIH Series Finals in Japan where I was the top scorer with 11 goals, I always try to contribute to our team's progress as much as I can," signed off the defender. (ANI)