Luka Doncic produced an incredible triple-double performance to lead Slovenia to the Olympics for the very first time as they defeated Lithuania 96-85 on Sunday here at Kaunas in FIBA Olympic Qualifying Tournament finals. 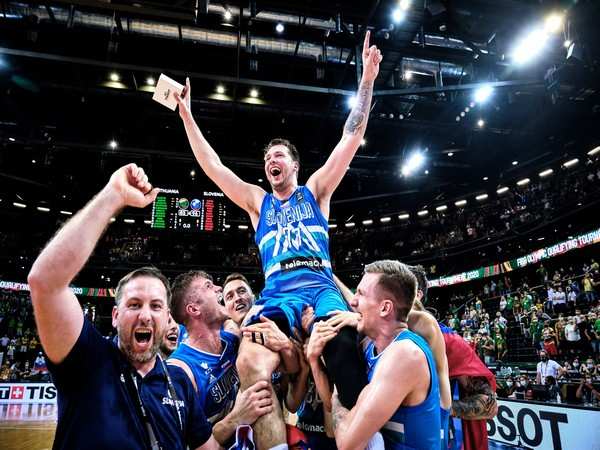 Kaunas: Luka Doncic produced an incredible triple-double performance to lead Slovenia to the Olympics for the very first time as they defeated Lithuania 96-85 on Sunday here at Kaunas in FIBA Olympic Qualifying Tournament finals.

Dallas Mavericks star Luka Doncic took control once again with an impressive 31 points, 11 rebounds, and 13 assists in a display for the ages in front of 11,561 fans at the Zalgiris Arena. Slovenia head to the Tokyo 2020 Men's Basketball Olympic Tournament, while Lithuania will miss out on the Games for the first time.

Twice Lithuania responded when down by double-digits to almost immediately clawing back the deficit. But a third rally proved one too many as Slovenia made another move late in the third with a 14-0 run across quarters as Vlatko Cancar repeatedly made big shots. That spell proved to be the difference as Slovenia stayed in control to win.

Doncic did it all for Slovenia with a memorable performance to lead the way for Slovenia, including 15 points in the second quarter on his way to his monster stat line. Jaka Blazic came out firing and added 16 points alongside Cancar, who overcame an injury scare in the Semi-Finals to play a key role. Meanwhile, Memphis Grizzlies center Jonas Valanciunas led the way for Lithuania with 14 points. Indiana Pacers forward Domantas Sabonis added nine.

Lithuania shot 56 per cent from the floor in the first half but went in level having missed seven free throws in that span. However, it is difficult to look beyond the stat line of Doncic and his efficiency value of 42 in the biggest game of the week.

The final four men's basketball spots in the Tokyo Olympic Games were determined Sunday, as eight teams tipped off in FIBA Olympic Qualifying Tournament finals. The finals were contested in Kaunas, Split, Belgrade, and Victoria.

The Czech Republic, winners of the Olympic Qualifying Tournament in Canada, will join the United States, France, and Iran in Group A in Tokyo. Germany, which won the tournament in Croatia on Sunday, joins Italy, which knocked out the hosts to win the tournament in Serbia, along with Australia and Nigeria in Group B.

Slovenia, which won the first final of the day on Sunday in Lithuania, will round out Group C, which already consists of Argentina, Japan, and Spain. (ANI)