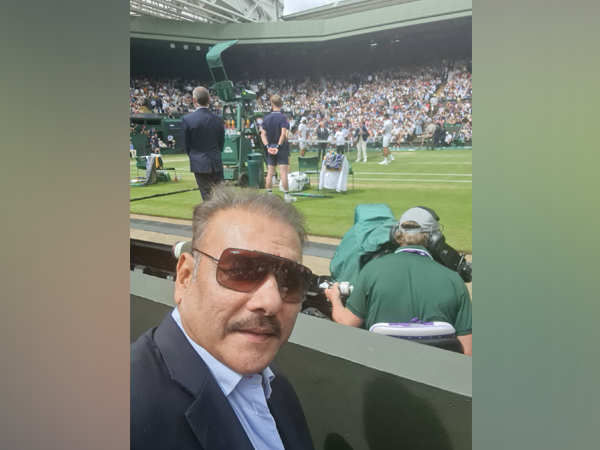 Taking to Twitter, Shastri posted a picture of himself sitting at the Centre Court and he captioned the post as: "Going to be an unreal experience courtside. Let's play @DjokerNole v @MattBerrettini #Wimbledon."

Djokovic has already won two Grand Slams this year -- the Australian Open and the French Open, and he is now chasing his third in the form of Wimbledon.

If the world number one wins the clash against Berrettini, then he will equal the record of Roger Federer and Rafael Nadal of winning 20 Grand Slams.

After the World Test Championship (WTC) final, the Indian cricket team was given a 20-day break. Earlier, Rishabh Pant and Jasprit Bumrah had also attended a Euro 2020 game while Ravichandran Ashwin was spotted watching Wimbledon.

The Virat Kohli-led team would enter the bio-bubble again on July 14.

India had lost the final of the WTC against New Zealand by eight wickets and they will now be seen in action in the upcoming five-match series against England. (ANI)