Natalie Sciver and Amy Jones smashed 55 and 43 runs respectively as England defeated India in the rain-curtailed first T20I on Friday. 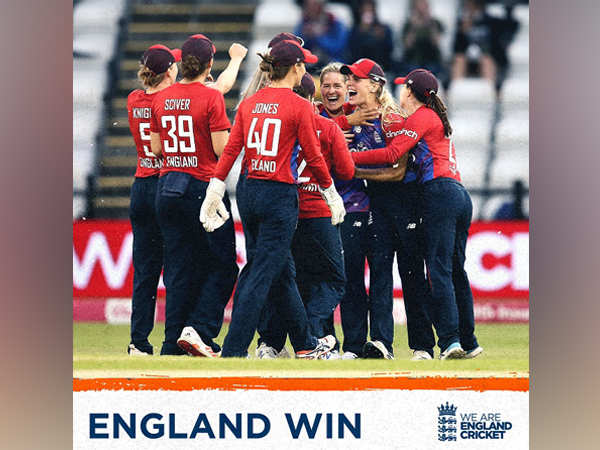 England scored 177 runs in 20 overs and then restricted India to 54/3 in 8.4 overs before rain stopped the play. Since the DLS par score at that stage was 72, India lost the match by 18 runs as no more play was possible due to rain.

With this win, England took a 1-0 lead in the T20I series with two matches to go.

Chasing 178, India got off to a bad start as Katherine Brunt removed Shafali Verma in the first over. Smriti Mandhana and Harleen Deol then stitched a 44-run stand to revive India's innings.

Sciver dismissed Mandhana on the last ball of the powerplay as the India opener got caught at deep backward square trying to clear the fence. The left-handed batter scored 29 off 17 balls.

In the next over Sarah Glenn removed India skipper Harmanpreet Kaur to further dent the visitors' chances in the chase. With Harmanpreet's wicket, India were reduced to 47/3 in seven overs.

Rain halted the play when India were 54 for 3 in the ninth over and since the visitors were behind the DLS equation, England sealed the first T20I as no further play possible.

Earlier, some sensational hitting from Sciver and Jones helped England score 177 in the allotted 20 overs.

For India Shikha Pandey took three wickets in the penultimate over to give India some momentum going into the chase but England bowlers picked quick wickets to put the visitors on backfoot.

In the 19th over, Harleen Deol's acrobatic effort won the hearts of the fans as she pulled off a stunner to dismiss Amy Jones.

Jones whacked the ball towards wide long-off and Harleen produced a stunning effort to dismiss the batter along with saving the six.