Italian centre-back Leonardo Bonucci on Sunday (local time) became the oldest goal-scorer in the history of the Euro finals. 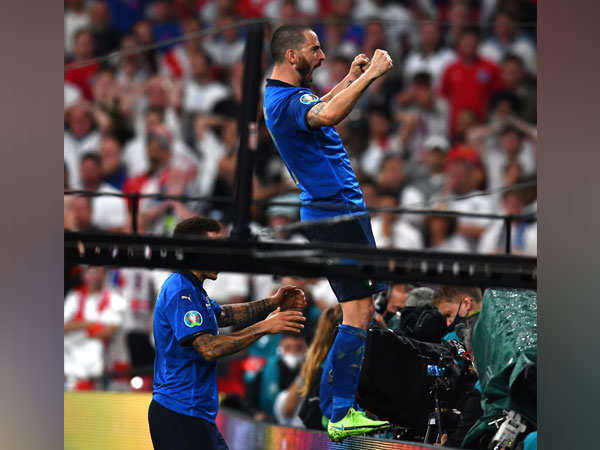 London: Italian centre-back Leonardo Bonucci on Sunday (local time) became the oldest goal-scorer in the history of the Euro finals.

He achieved the feat in the ongoing Euro 2020 finals between England and Italy here at the Wembley Stadium. By scoring in the 67th minute of the game, Italy got the equaliser and Bonucci became the oldest goal-scorer (34 days and 71 days).

Bonucci also has the most appearances for Italy in Euro finals history (18).

England got off to the perfect start as left-back Luke Shaw netted the ball into the goalpost in just the second minute of the match. The exact timing of the goal was 1 minute, 57 seconds, as per the official Twitter handle of UEFA Euro 2020.

Shaw started a counter down the left. The ball made its way from Harry Kane to Kieran Trippier, who went in to make a long cross. Shaw met it on the volley and he netted the ball into the goalpost, giving England a 1-0 lead.

No more goals were scored in the first half, and as a result, England entered half-time with a 1-0 lead and they were just 45 mins away from being crowned as the European champions.

In the second half, Leonardo Bonucci got the equaliser for Italy as he netted the ball into the goalpost in the 67th minute, bringing the scoreline level to 1-1.

England fans have waited for a trophy for 55 years as the Three Lions won the World Cup in 1966. Ever since that fans have been waiting for a trophy but England has reached the semifinals on few occasions, but reaching the finals remained a distant dream until this Euro 2020.

Queen Elizabeth II has sent a good luck message to the England team ahead of their Euro Cup final clash. After two epic semi-finals, London now hosts a decider which, for the first time in Euro history, is featuring feature England. (ANI)