After suffering a two-wicket loss against Royal Challengers Bangalore (RCB) in the Indian Premier League (IPL) tournament opener, Mumbai Indians' opening batsman Chris Lynn said that Hardik Pandya had a bit of shoulder niggle and that is why the all-rounder did not come onto bowl. 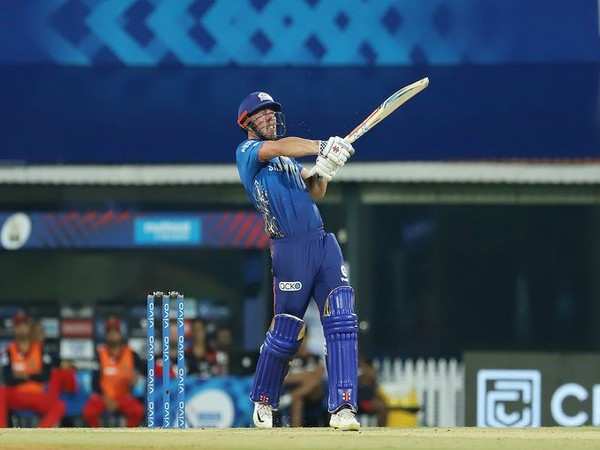 Chennai (Tamil Nadu) [India],  After suffering a two-wicket loss against Royal Challengers Bangalore (RCB) in the Indian Premier League (IPL) tournament opener, Mumbai Indians' opening batsman Chris Lynn said that Hardik Pandya had a bit of shoulder niggle and that is why the all-rounder did not come onto bowl.

Harshal Patel delivered a stunning bowling performance before AB de Villiers' masterclass as RCB defeated Mumbai Indians by two wickets. Harshal had picked five wickets (three in the final over) to restrict Mumbai Indians to 159 runs in the allotted 20 overs. In response, RCB got over the line on the last ball, courtesy of some fine hitting by De Villiers in the death overs. For RCB, Glenn Maxwell and AB de Villiers played knocks of 39 and 48 respectively. Skipper Virat Kohli also played a 33-run knock off 29 balls.

"I am not a 100 per cent sure but I think it is a bit of shoulder niggle. I am not sure though. It is more precautionary, he has played fair bit of cricket leading into this tournament. We have 14 games as well so you do not want to throw all your eggs into one basket and risk the injury if it is a shoulder. The physios, support staff and the medical team will treat Hardik if there is something wrong there," said Lynn during a virtual press conference.

"If he gets back to bowling, it adds another dimension to our team. We might have been missing the sixth bowler against RCB, but it's early stages in this tournament, there is a lot of cricket to come and we have to adapt to this wicket, we have five games here, so next four games so it is going to be tricky," he added.

Defending 160, Jasprit Bumrah bowled just one over at the start and then he came onto bowl after the 10-over mark when Glenn Maxwell and Virat Kohli were set at the crease.

When asked about whether Bumrah could have come onto bowl a bit earlier, Lynn said: "It is a tricky one. Rohit has been a very successful captain so you have to back the captain and the moves he makes. At that stage, we needed a wicket and overall, we were off our game just a little bit. I think Bumrah is excellent in his death bowling so Rohit maybe wanted to keep his overs for the back end. As we found from our batting innings, it got really tough at the back end."

"So to have someone like Bumrah at the death, it can go either way but as a batter, if you know Bumrah has three left in the latter half of the innings, it is mentally quite tough as well. There is a method to Rohit's madness but at the end, it was just a skill error from all of us," he added.

Earlier, Harshal Patel delivered a stunning bowling performance as Royal Challengers Bangalore (RCB) restricted Mumbai Indians to 159 runs in the allotted twenty overs after opting to bowl first. Harshal scalped five wickets in the innings and gave away just 27 runs from his four overs. For Mumbai Indians, Chris Lynn top-scored after playing a knock of 49 runs.

Lynn who was playing his first game was involved in a run-out which resulted in Rohit being sent back to the pavilion. Answering about Rohit's dismissal, Lynn said: "Look, I was a bit nervous as it was my first game for Mumbai and it was the first time I batted with Rohit as well. Look, it happens in the game of cricket as well, I thought there was a run and then not a run. If I had been able to run past him and sacrifice my wicket, I would have done that."

"Obviously, it was not the case, it happens in the game of cricket. It is not ideal running out your captain in your first. My first game, could be my last game, who knows? He was striking the ball well, we where 10-15 runs short, there were plenty of factors in the game, not just the run-out," he added.

Earlier this week, Mumbai Indians' scout and wicketkeeping consultant Kiran More tested positive for Covid-19. When asked whether this scare hampered the side's training, Lynn said: "Look, you can make up as many excuses as you want, but as players, over the years we have played enough cricket, we cannot use that as an excuse. In the group, we said that we would not use this as an excuse. We have got a great bunch of guys, it is tricky for different people in different areas as well."

"This group is very mentally strong and we do not want to give any excuses, we cannot control a lot of things but we can control the attitude, for us it is a no-excuse policy," he added. (ANI)