Ahead of Euro 2020 final against Italy, England fans were seen engaging in unruly behaviour at Leicester Square here. 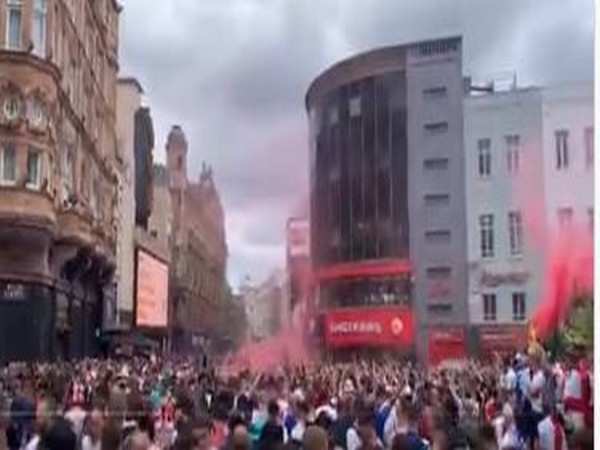 London : Ahead of Euro 2020 final against Italy, England fans were seen engaging in unruly behaviour at Leicester Square here.

In the videos that have surfaced online, it can be clearly seen a large crowd gathered at Leicester Square. They were seen throwing bottles and Leicester Square became the unofficial fan zone for the event.

Littering was also on display at Leicester Square and many on social media have voiced their opinion on how the fans are not behaving properly and this is not what should be on offer ahead of the high-voltage clash.

Hours before the match, people were seen throwing pint glasses into the air, trees were ripped up, bottles were thrown at windows.

England fans have waited for a trophy for 55 years as the Three Lions won the World Cup in 1966. Ever since that fans have been waiting for a trophy but England has reached the semifinals on few occasions, but reaching the finals remained a distant dream until this Euro 2020.

Queen Elizabeth II has sent a good luck message to the England team ahead of their Euro Cup final clash. After two epic semi-finals, London now hosts a decider which, for the first time in Euro history, will feature England.

The Three Lions had defeated West Germany 4-2 in the 1966 World Cup final. The Queen was in attendance as she witnessed the high octane clash.

"55 years ago I was fortunate to present the World Cup to Bobby Moore and saw what it meant to the players, management, and support staff to reach and win the final of a major international football tournament," a message from Windsor Castle read.

"I want to send my congratulations and that of my family to you all on reaching the final of the European Championships, and send my good wishes for tomorrow with the hope that history will record not only your success but also the spirit, commitment, and pride with which you have conducted yourselves," it added.

Since that famous World Cup triumph at the previous Wembley Stadium, England has lost in the semi-finals of five major tournaments: EURO '68 and '96, the 1990 and 2018 World Cups, and the 2019 UEFA Nations League.

However, the Gareth Southgate-led English side has buried those ghosts of the past as they have seen off Germany, Ukraine and, Denmark to earn their chance to end 55 years of drought in the Euro 2020 final. (ANI)