Italy booked their berth in the Euro 2020 final after seeing a lead wiped out but then defeating Spain on penalty shoot-out by 4-2 at Wembley on Tuesday (local time). 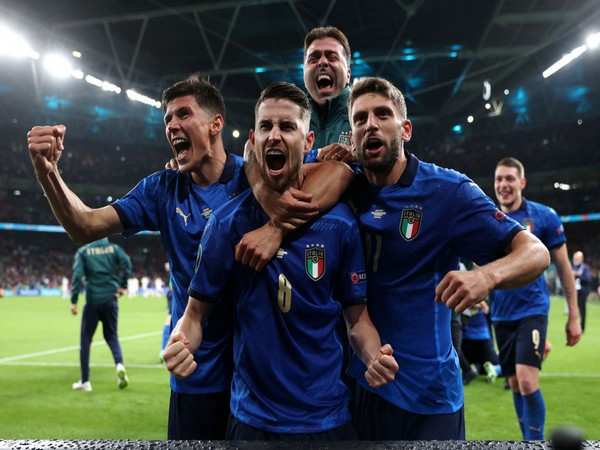 London [UK]: Italy booked their berth in the Euro 2020 final after seeing a lead wiped out but then defeating Spain on penalty shoot-out by 4-2 at Wembley on Tuesday (local time).

Italy started brightly at the beginning of the match but Spain began to take control in midfield. The first clear chance came on 25 minutes when Dani Olmo pounced on a loose ball but was denied by Gianluigi Donnarumma. After several efforts from both sides, the first half ended goallessly.

The second half-boiled over with chances, as on the hour mark, Chiesa broke the deadlock by picking up a loose ball on the edge of the box, cutting inside and curling a shot inside the far post.

Berardi, again, nearly doubled the advantage for Italians with ten minutes left but once more could not beat the Spain keeper; La Roja went straight up the other end and Morata, brought on after the Italy goal, levelled following a smart passing exchange with Dani Olmo. This was Morata's sixth Euro finals goal which saw him moving one ahead of Spain's previous record-holder, Fernando Torres.

In extra time, Italy somehow survived a succession of shots in which both Olmo and Morata had efforts repelled, and shortly afterwards Marcos Llorente was similarly frustrated by Leonardo Bonucci. But it went to penalties, Unai Simon saving the first kick from Manuel Locatelli and Olmo then missing. Spain's fourth attempt from Morata was stopped by Donnarumma and Jorginho coolly slotted in the winner.

Both teams were in a record sixth Euro shoot-out; it was Italy's third such success and Spain's second reverse, as per UEFA. With this win, Italy are into their fourth European Championship final, behind only Germany on six.