Leonardo Bonucci trolled the English fans at Wembley Stadium while taking a lap of honour with the Euro trophy after Italy defeated Three Lions' 3-2 on penalties. 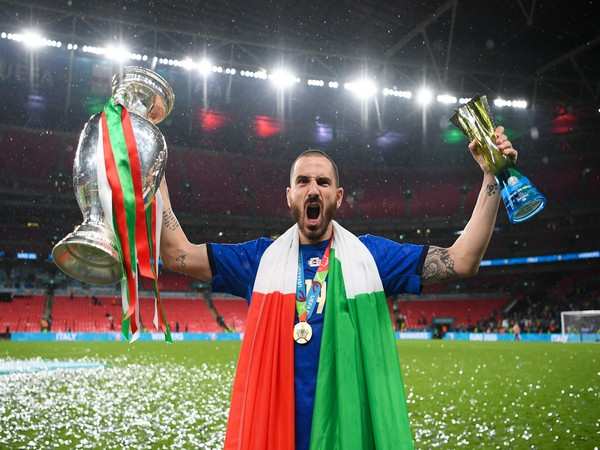 London : Leonardo Bonucci trolled the English fans at Wembley Stadium while taking a lap of honour with the Euro trophy after Italy defeated Three Lions' 3-2 on penalties.

During the match, Italian center-back Leonardo Bonucci scored the goal in the 67th minute of the game to equalise for Azzurri and also became the oldest goal-scorer (34 years and 71 days) in the Euro final. Bonucci also has the most appearances for Italy in Euro finals history (18).

The normal 90-minute action had finished at 1-1 and on to extra time, and then penalties, where both goalkeepers saved two. Pickford denied Andrea Belotti and Jorginho; Gianluigi Donnarumma denied Bukayo Saka and Jadon Sancho, while Marcus Rashford hit the post as Italy edged a penalty shoot-out dripping in tension to overcome England in the UEFA Euro 2020 final.

When taking a lap of honour, Bonucci shouted toward the English fans: "More pasta! We need to eat more pasta!" Additionally, he grabbed a camera and said: "It's coming to Rome."

"A historic goal is a dream come true and the credit goes to the coach, the whole squad," Goal.com quoted Bonucci in a saying to RAI Sports. "When we got together in Sardinia, there was something different compared to the past. We slowly gained confidence, certainty, unity. This was the icing on the cake that makes us legends.

"It's a unique feeling and we are relishing it. Seeing 65,000 people leave before the trophy was handed out is something to relish, now the cup is coming to Rome. They thought it was staying in London, sorry for them, but Italy once again taught a lesson. We said during the warm-up, what was happening in the stands was purely just background noise. We had 34 games unbeaten, all we needed to do was exactly what we'd done so far to get here, not one bit more, not one bit less."

Italy have become the fourth side to win multiple EURO titles after Germany (3), Spain (3), and France (2). The 53-year gap between their titles is the longest in EURO history. Italy are now 34 matches unbeaten, dating back to September 2018. (ANI)