Delighted to be named Player of the ODI Series against India, says Ecclestone

England spinner Sophie Ecclestone on Monday said that she is delighted to be named as Player of the Series for her performances in the ODIs against India. 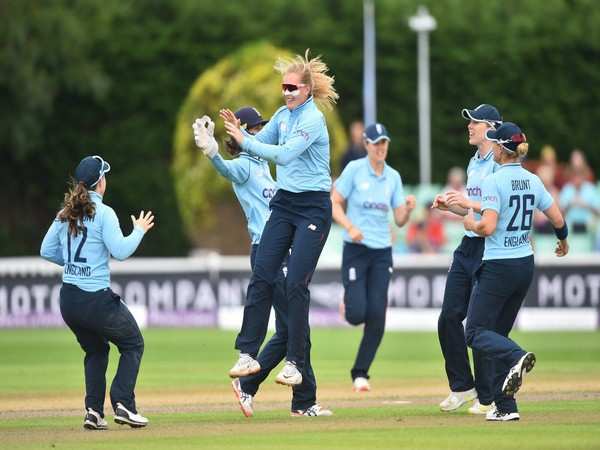 Worcester : England spinner Sophie Ecclestone on Monday said that she is delighted to be named as Player of the Series for her performances in the ODIs against India.

The Three Lions defeated Mithali Raj-led India 2-1 in the three-match ODI series and Ecclestone was adjudged Player of the Series after she took eight wickets from three matches.

"ODI series. Disappointing result yesterday, a game we can learn from but delighted to be named Player of the Series! #gettysport #ENGvIND," Ecclestone tweeted.

India defeated England by four wickets in the third ODI on Saturday at the New Road, Worcester. Mithali Raj played a captain's knock as she remained unbeaten on 75. In the end, Rana also played a crucial 24-run knock off just 22 balls with the help of three fours.

In the third and final ODI, Mithali was also able to become the highest run-scorer in women's international cricket, across all three formats. She surpassed England's Charlotte Edwards to become the leading run-scorer.

India went on to lose the three-match ODI series against England but the solitary win in the third ODI will give the visitors a much-needed boost ahead of the upcoming T20I leg of the tour.

Harmanpreet Kaur has not been able to show any form with the bat as she recorded scores of 16,19 and 1 in the three ODIs. She was not able to get among the runs in the one-off Test as well. (ANI)