Pacer Jasprit Bumrah along with his wife Sanjana Ganesan attended Euro 2020 first semi-final between Spain and Italy at the Wembley Stadium in London. 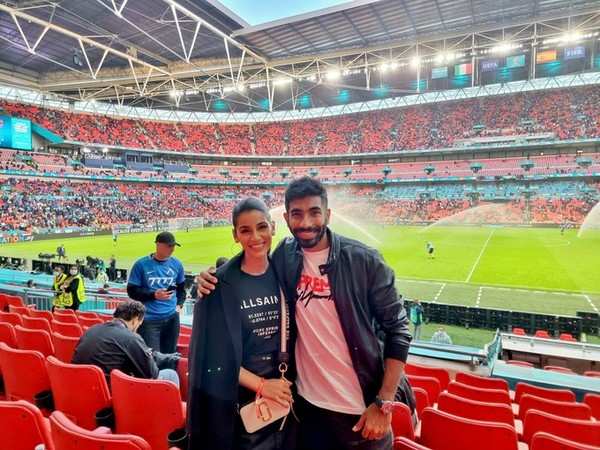 London: Pacer Jasprit Bumrah along with his wife Sanjana Ganesan attended Euro 2020 first semi-final between Spain and Italy at the Wembley Stadium in London.

Bumrah posted a photo of himself along with his wife Sanjana where they can be seen standing in the stands of Wembley Stadium.

After the World Test Championship (WTC) final, the Indian cricket team was given a 20-day break. Earlier, Rishabh Pant had also attended a Euro 2020 game while Ravichandran Ashwin was spotted watching Wimbledon. The Virat Kohli-led team would enter the bio-bubble again on July 14.

India had lost the final of the WTC against New Zealand by eight wickets and they will now be seen in action in the upcoming five-match series against England.

Italy booked their berth in the Euro 2020 final after defeating Spain on penalty shoot-out by 4-2 at Wembley on Tuesday (local time).

Both teams were in a record sixth Euro shoot-out; it was Italy's third such success and Spain's second reverse, as per UEFA. With this win, Italy is into their fourth European Championship final, behind only Germany on six.