Congress interim president Sonia Gandhi will hold a virtual meeting on Saturday with Chief Ministers of Congress-ruled states on the issue of the COVID-19 situation as the country witnessed a surge in coronavirus cases. 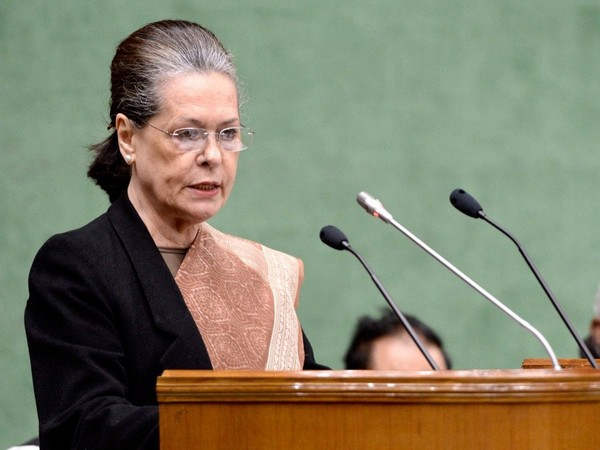 New Delhi [India], Congress interim president Sonia Gandhi will hold a virtual meeting on Saturday with Chief Ministers of Congress-ruled states on the issue of the COVID-19 situation as the country witnessed a surge in coronavirus cases.

In the meeting, the status of the COVID-19 in the states will be reviewed. The Congress leadership will also make suggestions to help the public, as per the sources.

The meeting comes a day after Congress leader Rahul Gandhi has written to Prime Minister Narendra Modi asking him to place an immediate moratorium on the export of vaccines, fast track approval of other vaccines and open up vaccination to everyone who needs it.

Criticising the PM, Gandhi asked whether the export of vaccines was an effort to garner "publicity".

Referring to the PM's appeal to the chief ministers to organise a vaccine festival from April 11 to 14, he tweeted that shortage of vaccines amid the rise in Covid-19 cases is a very serious issue.

"India had the first-mover advantage in vaccination and yet we are moving at a snail's pace.

Historically, India has achieved abundant experience in designing and executing some of the world's biggest vaccination programmes. Yet in the present case, we have managed to fully vaccinate less than 1% of the population in 3 months..." the letter said.

"While our nation is facing vaccine starvation, more than 6 crore doses of vaccines have been exported... Was the export of vaccines also an 'oversight', like many other decisions of this government, or an effort to garner publicity at the cost of our citizens?""Double central allocation for vaccine procurement from the existing Rs 35.000 crore. Give State governments a greater say in vaccine procurement and distribution. Provide direct income support to the vulnerable sections in the disastrous second wave," Gandhi said in his letter.

Gandhi further said that it is unfortunate that India is under a renewed attack of the Covid-19 virus, "considering our scientific community and vaccine suppliers worked overtime to develop a solution but their efforts are undermined by the Centre's poor implementation and "oversight"."

He noted that India has achieved abundant experience in designing and executing some of the world's biggest vaccination programs. "Yet in the present case, we have managed to fully vaccinate less than 1 per cent of the population in 3 months," he wrote.

He said that at India's current vaccination rate, it would take years to inoculate 75 per cent of the population, and it will have catastrophic effects and will gravely decelerate India's economy.

Gandhi added that the "Centralization and individualized propaganda" are counter-productive.

"Even though Public Health is a state subject, our states have been bypassed right from vaccine procurement to registration. Additionally, a large section of the poor has been excluded due to the initial mandatory online registration," he added.

To prevent the surge in COVID-19 cases, Chief Minister Ashok Gehlot has imposed night curfew in nine cities of Rajasthan with effect from Saturday till April 30.

As per an order by the Rajasthan government, it said, "Night curfew imposed in 9 cities-Ajmer, Alwar, Bhilwara, Chittorgarh, Dungarpur, Jaipur, Jodhpur, Kota and Abu Road starting from 8 pm to 6 am, till April 30."

"In Udaipur, the night curfew will start from 6 pm to 6 am", the order informed.