With the Monsoon session of Parliament round the corner, the first in-person meeting of the Union Cabinet was held at Prime Minister Narendra Modi's official residence on Wednesday. 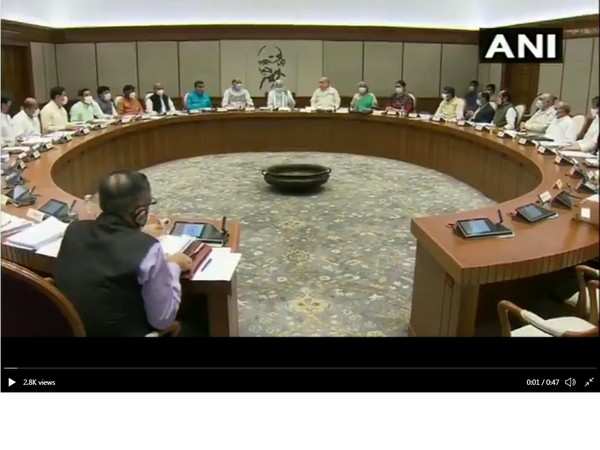 New Delhi: With the Monsoon session of Parliament round the corner, the first in-person meeting of the Union Cabinet was held at Prime Minister Narendra Modi's official residence on Wednesday.

The Union Cabinet held its first physical meeting in over a year today.

Notably, Prime Minister Narendra Modi held the first meeting with the Council of Ministers virtually after the Union Cabinet reshuffle on July 7.

A day after the expansion of the Union Cabinet, the Prime Minister had back-to-back meetings with the union cabinet and council of ministers on Thursday.

In the meeting, sources had said that Prime Minister had cautioned Ministers against any complacency in the fight against COVID-19, saying that over the past few days there have been pictures and videos of crowded places and people roaming about without masks or social distancing and "it should instil a sense of fear in us".

The sources said that the Prime Minister noted that people not following COVID-19 protocols was not a "pleasant sight".

Today's meeting comes two days after the Cabinet Committees were reconstituted by the Central Government on Monday.

The CCPA is one of the most important committees that take decisions on political strategy.

In the Cabinet Committee on Parliamentary Affairs, Law Minister Kiren Rijiju, and Information and Broadcasting and Sports Minister Anurag Thakur have been included as members for the first time, along with Tribal Affairs Minister Arjun Munda.

While Rijiju takes the place of Ravi Shankar Prasad, Thakur has replaced Prakash Javadekar in this committee. Union Minister of Social Justice and Empowerment Virendra Kumar has also been included in place of Thawarchand Gehlot, who has recently taken charge as Karnataka Governor.

Union Ministers Arjun Ram Meghwal, and V. Muraleedharan have been included as special invitees to this committee.

Another key inclusion is that of Civil Aviation Minister Jyotiraditya Scindia in the Cabinet Committee on Investment and Growth.

In 2019, the reconstitution of various Parliamentary committees had led to controversy after Defence Minister Rajnath Singh was left out of key CCPA. Later the government had to amend the composition of CCPA to include Singh in the key decision-making body.

The Monsoon session of Parliament is set to commence from July 19 and will conclude on August 13. (ANI)