Ahead of the Rath Yatra, Biswajit Nayak, an artist from Puri has created Lord Jagannath's chariot with 975 ice cream sticks. 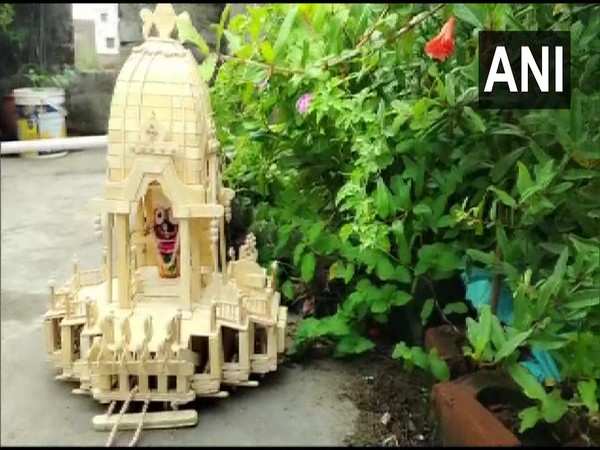 Puri : Ahead of the Rath Yatra, Biswajit Nayak, an artist from Puri has created Lord Jagannath's chariot with 975 ice cream sticks.

While speaking to ANI, Nayak said, "I created a miniature of Nandighosa's chariot (of Lord Jagannath) with 975 ice cream sticks. I have tried to ensure the same specifications as that of Lord's chariot."

"It has 16 wheels and four horses. It took me five days to complete to make it," said Biswajit Nayak.

Rath Yatra is a festival associated with Lord Jagannath held at Puri annually in the state of Odisha.

on Tuesday, the Supreme Court rejected a batch of petitions seeking direction to conduct Rath Yatra across Odisha and not only in Puri Jagannath temple, as permitted by the Odisha State Government in its order earlier.

"This year more people died, and last year, lesser number of people died," the three-judge bench of the Apex Court, headed by Chief Justice of India (CJI) NV Ramana observed and dismissed the batch of petitions seeking its direction to conduct the Rath Yatra, across many cities in Odisha, and not only in Puri.

The Odisha State Government had allowed and permitted to conduct the Rath Yatra only in Puri Jagannath temple with strict COVID-19 restrictions and protocols. (ANI)