No decision taken to change name of any village in Kasaragod, says Kerala CM to Siddaramaiah

Kerala Chief Minister Pinarayi Vijayan on Tuesday informed former Karnataka Chief Minister Siddaramaiah that no decision has been taken to change the name of any village in the Kasaragod district of Kerala. 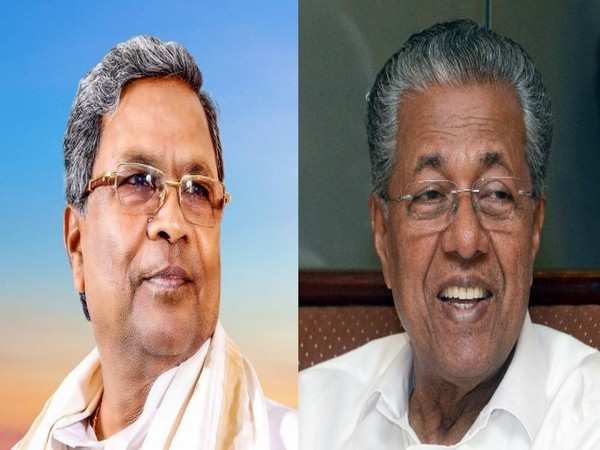 Thiruvananthapuram: Kerala Chief Minister Pinarayi Vijayan on Tuesday informed former Karnataka Chief Minister Siddaramaiah that no decision has been taken to change the name of any village in the Kasaragod district of Kerala.

In a letter addressed to Siddaramaiah, Kerala CM wrote, "I am in receipt of your letter dated June 29, 2021. Let me assure you that no decision has been taken to change the name of any village in the Kasaragod district. There need not be any apprehensions in this regard. We fully appreciate the feelings expressed by you for strengthening harmony and the bond among people of both the States."

This news came in amid objections raised by Karnataka leaders over reports of Kannada names being changed to Malayalam in some areas of the Kasaragod district.

"Here is my letter to @CMOKerala Shri. @vijayanpinarayi urging him to take necessary action against those attempting to change the names of villages which is derived from Kannada & Tulu," tweeted Siddaramaiah on June 29.

In a letter to Vijayan on June 29, Siddaramaiah wrote, "It is unfortunate that there are reports of local bodies in Kasaragod taking decisions to change the names of few villages in Kasargod whose names are derived from Kannada and Tulu."

"People of Kasargod share unique relationship with Kannada and are emotionally connected with the village names. Any attempts to rename the villages will demoralise them and shall make them feel alienated from their homeland. It is essential to not let few anti-social elements to disturb the sense of universal brotherhood. I hope necessary actions are initiated against those attempting to rename the villages," wrote Leader of Opposition in Karnataka Legislative Assembly.

Regarding keeping the schools in the Kasaragod district shut due to the pandemic, Kerala CM in his letter today wrote, "All schools remain closed in our state consequent to pandemic and classes are conducted online. Steps have been taken to relay classes in Kannada medium also through local cable channels."

He wrote this in response to Siddaramaiah comment in the letter stating, "I also take an opportunity to highlight the issues related to closure of Kannada schools in Kasaragod. Many families want their children to study in their mother tongue and states encouraging the same will strengthen linguistic diversity and ensure unity in the region. I request you to kindly take initiatives in this direction to promote linguistic diversity."

Karnataka leaders had written to Vijayan on the same day requesting him to halt the process of renaming villages. (ANI)