A flooded workplace every monsoon brings no surprise to Ram Krishna Shilpakar, a wood architect of Bhaktapur, as water in the Hanumante River always makes its way into his tin thatched structure, where he has been making wooden scriptures since nearly a decade. 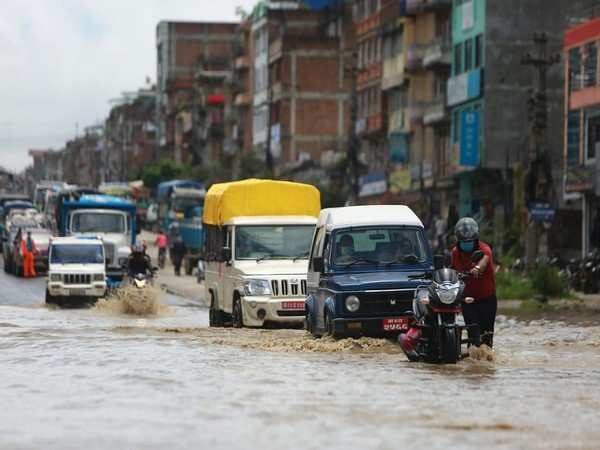 Bhaktapur/ Kavrepalanchok: A flooded workplace every monsoon brings no surprise to Ram Krishna Shilpakar, a wood architect of Bhaktapur, as water in the Hanumante River always makes its way into his tin thatched structure, where he has been making wooden scriptures since nearly a decade.

"It's been about a decade that I am running my business here, it's a phenomenon that takes place annually," Shilpakar told ANI.

"On an annual basis, I have been incurring losses of about 30 to 40 thousand. Machines stop working after being submerged in water, other materials and essentials used for produces gets soaked and damaged. We cannot come and work in such situations which ultimately would increase loss. Also, flood water dumps wastages inside, forcing us to shift to other places," Shilpakar added.

Along with the business of Shilpakar, temples, paddy fields and houses around the ancient city of Bhaktapur submerged in the water after heavy downpours in early Friday morning.

Monsoon- annual rainfall pattern which remains activated in the Himalayan Nation from June to August recharges most of the rivers and its tributaries which often results in flooding and sometimes sweeps away landmasses.

As many as 51 people have already lost their lives in less than a month since the start of the monsoon as floods, landslides, and inundation induced by heavy rainfall is wreaking havoc across the nation. As per data from the Nepal Police headquarters, 26 men, 15 women and 10 children are among those killed. Of them, five are from Sindhupalchowk, four from Doti, three each from Rolpa, Dang, Palpa, Darchula and Gorkha.

According to Meteorological Forecasting Division, the present monsoon trough will remain active till Saturday afternoon in many parts of the country including Province No 1, 2, Bagmati, and Lumbini. There is a chance of very heavy rainfall in one or two places of Bagmati, Gandaki, and Lumbini Provinces this week.

Meanwhile, water flow in Narayani and its tributaries, especially Budhigandaki, Trishuli, Marsyangdi, and Kaligandaki, has increased significantly and some of them reached alarming levels on Thursday afternoon.

Also, water flow in Saptakoshi and its tributaries Sunkoshi, Bhotekoshi, Tamakoshi, Dudhkoshi, Arun, Tamor, and other rivers is expected to increase and some of them will reach near alert level while the flow in the Tinau, Kankai, Kamala, Bagmati, and their tributaries will increase significantly till Saturday.

As the monsoon takes destructive form in the Himalayan Nation, major road sections are facing inundation or disruption in operation. A section of Arniko Highway that links capital Kathmandu with some districts of Southern Plains got disturbed for hours on Friday as it was submerged in water, throwing traffic out of gear.

"Every single year, that too for over dozen times, we have been facing inundation in the area we have to go through this situation time and again," Krishna Kumar Ranjitkar, a flood victim resident of Banepa in Kavrepalanchok District complained ANI.

"We face a lot of problem with this (inundation after rainfall), my house is flooded with water. A few years back also, the river flooded my house. Crossing a bridge, it entered all residential homes," Krishna Kumar added.

Meteorologists of Nepal and other South Asian nations earlier have forecasted that the monsoon for the year 2021 will arrive earlier than last year and Nepal and some other Asian countries are expected to receive normal to above-normal rainfall.

As per Nepal's Meteorological Forecasting Division (MFD), the monsoon has already set off in Nepal from June 1st which will continue for about three months. (ANI)