Mamata says 'khela hobe', people in Bengal say there will be slogans for lotus: Smriti Irani

Union Minister and Bharatiya Janata Party (BJP) leader Smriti Irani on Wednesday lashed out at West Bengal Chief Minister Mamata Banerjee, saying that while she talks of 'khela hobe', the people of the state are saying there will be slogans for lotus. 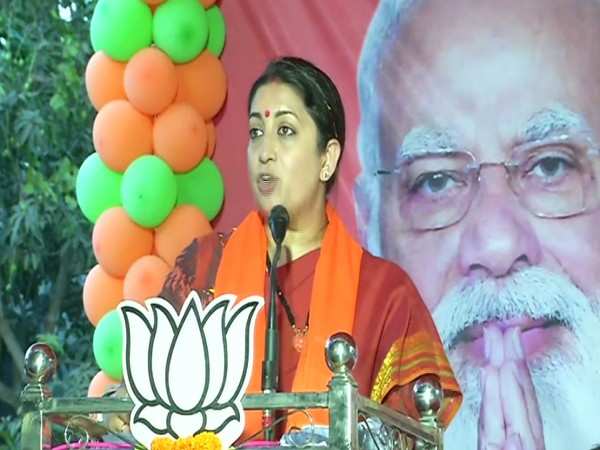 North 24 Parganas (West Bengal) [India],  Union Minister and Bharatiya Janata Party (BJP) leader Smriti Irani on Wednesday lashed out at West Bengal Chief Minister Mamata Banerjee, saying that while she talks of 'khela hobe', the people of the state are saying there will be slogans for lotus.

"Before this election, she told every person 'khela hobe'. But she does not know that after each phase, people of Bengal are telling her 'Didi, you are saying khela hobe, people are saying 'poddophooler naara hobe' (there will be slogans for the lotus)," she added.

Lotus is the election symbol of the BJP.

She further targeted Banerjee, saying that the party which talks of 'Ma, Mati and Manush' is "insulting women, bloodying the soil and handing over homes to syndicates".

She alleged that Mamata Banerjee came to power on the claims of bringing 'poriborton' (change) and ending the atrocities inflicted by the Left government but the "previous government's goons have now turned into the goons of Trinamool Congress (TMC)."

Irani also claimed that a video clip has emerged in Ashok Nagar where Mamata Banerjee allegedly told a TMC candidate "to stop his smuggling".

"This is not an ordinary election. This election is for the development of every poor person and family, the respect of every woman in Bengal," she said.

"Didi says' Bangla nijer meyeke chaaye' (Bengal wants her own daughter). I said earlier that which daughter are you talking about? What situation she and her goons had left the state in after the Amphan cyclone? Did the rice sent by the PM Modi reach the people? TMC's goons have stolen the rice of poor people," the Union Minister said.

Irani said once a BJP government is formed in the state, "every TMC goon will be sent behind bars".

"Every vote for the TMC is an insult to women, poor people, and the state. If you want to protect the state and preserve the culture, press the lotus and give your blessings to BJP," she added.

The high-decibel campaigning for the fifth phase of the ongoing West Bengal Assembly elections concluded at 6 pm on Wednesday, as leaders of the political parties taking part in the high-stakes polls left no stone unturned to woo the voters of the state.

The campaigning ended early today as the Election Commission (EC) on Saturday said the silence period for the fifth phase shall be extended to 72 hours. The decision came after violence in the fourth phase of the election in which five persons died. (ANI)