Kumbh 2021: All 13 akharas participated in third 'Shahi Snan' in Haridwar first time since 1974

All 13 akharas took a holy dip at river Ganga on the occasion of 'Baisakhi Shahi Snan' during Kumbh, the first achievement since 1974, the Kumbh Mela Inspector General (IG) Sanjay Gunjyal said on Wednesday. 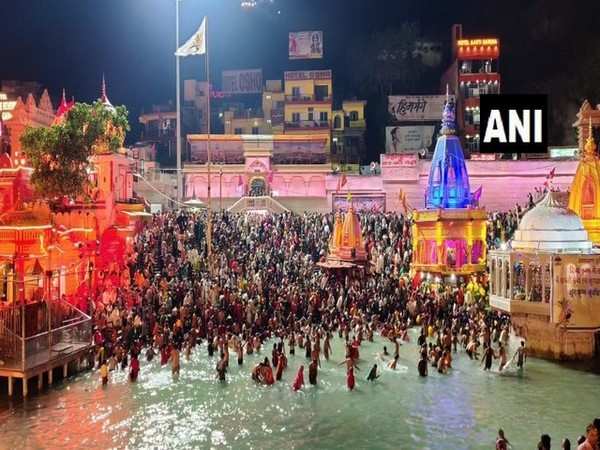 Haridwar (Uttarakhand) [India],  All 13 akharas took a holy dip at river Ganga on the occasion of 'Baisakhi Shahi Snan' during Kumbh, the first achievement since 1974, the Kumbh Mela Inspector General (IG) Sanjay Gunjyal said on Wednesday.

"Baisakhi's snan is considered to be biggest of all 4 shahi snan and 11 snan of Kumbh combined. Compared to 1.60 crore people who arrived here in 2010, as captured by satellite image, around 6 lakh people arrived this year for Baisakhi snan," Gunjyal told ANI.

"The biggest challenge was to complete the shahi snan on Wednesday without any interruption," Gunjyal added.

"If we look back in the history of the Kumbh, the Baisakhi Shahi Snan was never completed after 1974. In 1986, due to the stampede at the Kumbh during the third royal bath, the akharas were not able to take the holy dip," the IG Kumbh said.

He further said that during the Kumbh in 1998, a clash between to akharas interrupted the third Shahi Snan, while in 2010 Juna, Avahan and Agni akharas had to return due to some unforeseen reasons.

"All 13 akhadas were not able to take the holy dip on the Baisakhi Shahi Snan for the last three Kumbh," he said.

"It was good that in 2021, all 13 akharas were able to take the holy dip during the Baisakhi Shahi Snan uninterruptedly," the IG added.

Around 14 lakh devotees took a holy dip in the River Ganga at the Haridwar Mahakumbh on Wednesday on the occasion of Baisakhi Shahi Snan, which is the third royal bath in this Kumbh.

The first bath was held on March 11 on the occasion of Mahashivratri, while the second took place on April 12 and the third ended on April 14. According to the schedule of major events, four 'Shahi Snan' and nine 'Ganga Snan' will take place at Haridwar this year.

The snans are a part of the Kumbh Mela that is supposed to be held in Haridwar from April 1 to April 30 in order to limit the festival this year to 30 days due to the ongoing coronavirus pandemic.

In normal circumstances, Kumbh continues for nearly four months but this year due to the COVID-19 pandemic, the duration of the congregation has been curtailed to one month. (ANI)