Amid a surge in COVID-19 cases across the country, Union Minister for Health and Family Welfare Dr Harsh Vardhan chaired a high-level meeting with the Health Ministers of 11 states and Union territories (UTs) on Saturday and reviewed the availability of oxygen, ventilators, manpower, medicines and hospital beds. 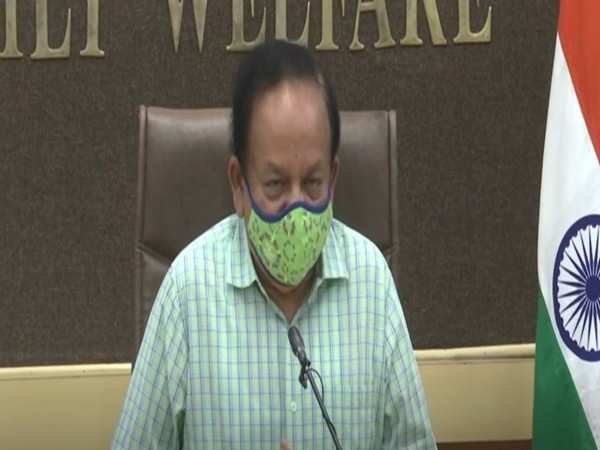 New Delhi: Amid a surge in COVID-19 cases across the country, Union Minister for Health and Family Welfare Dr Harsh Vardhan chaired a high-level meeting with the Health Ministers of 11 states and Union territories (UTs) on Saturday and reviewed the availability of oxygen, ventilators, manpower, medicines and hospital beds.

He said there is no shortage of the COVID-19 vaccine and strongly pushed for the further ramping up of vaccination exercise.

The meeting discussed measures taken by the states and UTs for prevention, containment and management of the recent surge in COVID-19 cases.

According to an official release, the Health Minister presented a snapshot of the unprecedented rise in new cases at the outset and noted that India reported its highest single-day spike on April 12 which was also the highest number of daily new cases reported in the world.

India contributed 22.8 per cent of the total cases reported worldwide on April 12.

Harsh Vardhan spoke about the number of beneficiaries vaccinated in each targeted segment of the population and also addressed the perceived issue of vaccine shortage.

He said that the total consumption of vaccines so far (wastage included) has been approximately 12, 57,18000 doses against the 14.15 crore doses provided by the centre to the states and union territories.

The minister said that about 1.58 crore doses are still available with the states and union territories while another 1,16,84,000 are in pipeline to be delivered by next week.

He said India is currently reporting the sharpest growth rate of 7.6 per cent in new COVID cases, which is 1.3 times higher than the case growth rate of 5.5 per cent reported in June 2020.

"This is leading to an alarming rise in the daily number of active cases, which currently stand at 16,79,000. There is also a sharp growth of 10.2 per cent in the number of deaths. The widening gap between daily new cases and daily new recoveries reflects that the infection is spreading at a much faster rate than recoveries with consistently growing active cases," the Minister said.

Recalling that 34,228 ventilators were granted to the states by the Centre last year, Harsh Vardhan assured a fresh supply of the lifesaving machines.

The health ministers of states also shared a brief snapshot of the actions taken for containment, surveillance and treatment of the COVID positive cases along with best practices.

The release said that issues of augmenting the supply of oxygen cylinders, stepping up the supply of Remdesivir in hospitals, adding to the ventilator stock, and enhanced supply of vaccine doses were raised by almost all the states.

Many of them raised the issue of dovetailing the medical oxygen supply lines and the capping of prices of essential drugs like Remdesivir which has been sold in the black market at exorbitant prices.

Double mutant strain in Maharashtra was a key point of concern. The Delhi government requested additional beds in central government hospitals as was done in 2020 to help tide over the emergent health crisis.

The notification of Home Ministry granting permission to the states to utilize up to 50 per cent of their annual allocation of State Disaster Response Fund and that of the Union Health Ministry allowing for utilization of unspent pending balance under National Health Mission as on April 1 for COVID management purposes was also re-iterated.

The states and Ts that participated in the meeting include Maharashtra, Chhattisgarh, Rajasthan, Gujarat, Madhya Pradesh, Kerala, West Bengal, Delhi, Karnataka, Tamil Nadu and Uttar Pradesh. These states and UTs are reporting an unprecedented surge in new COVID cases. (ANI)