Haryana Health Minister, Anil Vij said that by the end of this month, efforts will be made to vaccinate about 35 lakh people in the state. So far, about 21 lakh people have been vaccinated for Covid-19 in Haryana. 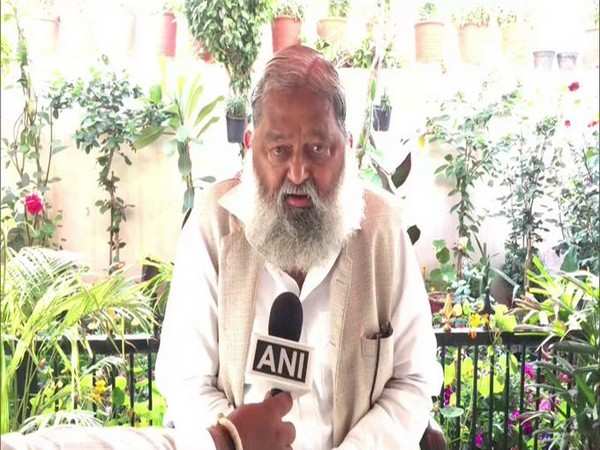 Chandigarh (Haryana) [India], Haryana Health Minister, Anil Vij said that by the end of this month, efforts will be made to vaccinate about 35 lakh people in the state. So far, about 21 lakh people have been vaccinated for Covid-19 in Haryana.

Apprising Union Health Minister, Dr Harsh Vardhan during a review meeting of 11 states, Vij on Tuesday said that the State will take all necessary measures to control the second wave of Covid-19.

He said that at present there are 13,000 active cases in Haryana and about 25,000 tests are conducted daily and the positive rate is about 4.7 per cent.

"We are trying to increase testing further in the state", he added.

Vij said that 35 labs, with a capacity of conducting 92,000 tests per day, for Covid-19 are functional in the state. He said that there is an adequate number of isolation wards, ventilators, general beds, oxygen-equipped beds, ICUs, medicines and equipment in the state.

He requested the Union Health Minister that the reports of samples sent by the state government for investigation should be sent soon so that new strains can be detected and treated accordingly.

Along with this, he said that if a new protocol for treatment has been prepared by the Central Government, then it should also be shared with the states soon.

Earlier, during a meeting chaired by Vij, he directed the officers connected with the health services of the state to start Covid-19 hospitals again in the state as per the requirement.

For this, they have been asked to inspect such hospitals in the next three-four days and notify them. The hospitals will also be listed on the portal of the department. He said that adequate stock of PPE kits, masks, medicines and other essential items will be kept in the state.

These states have been reporting a very high rise in daily cases and daily mortality because of COVID-19 in the last two weeks. (ANI)