Raipur (Chhattisgarh) [India], May 23 (ANI): Chhattisgarh Chief Minister Bhupesh Baghel on Sunday directed that a new mobile phone as a compensation will be provided to the youth, whose mobile got damaged during the alleged misbehaviour by the collector. 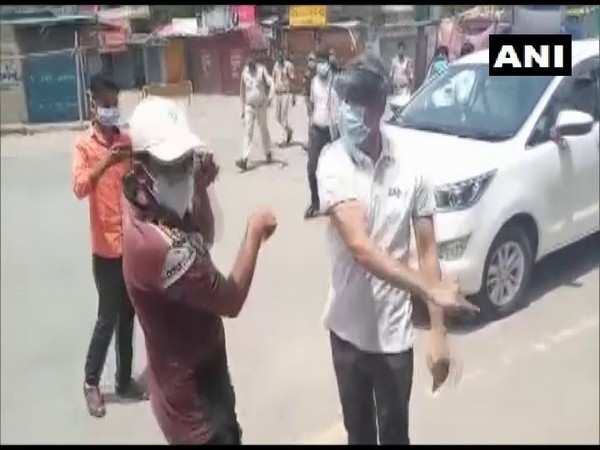 Raipur (Chhattisgarh) [India], May 23 (ANI): Chhattisgarh Chief Minister Bhupesh Baghel on Sunday directed that a new mobile phone as a compensation will be provided to the youth, whose mobile got damaged during the alleged misbehaviour by the collector.

This comes a day after social media videos of Surajpur District Collector Ranbir Sharma emerged where he was seen slapping a man and throwing away his phone.

"Chief Minister @bhupeshbaghel has instructed that a new mobile phone should be made available to the youth in Surajpur as a compensation for the damaged mobile of the young man during misbehavior with the Collector," tweeted the CMO.

Meanwhile, the Chhattisgarh IAS Association on Sunday said that this kind of behaviour from a senior officer like him is not acceptable and advised him to compensate for the youth's phone from his personal income.

"A senior officer should not behave like this. One can always take appropriate action against any person whose behaviour is not Covid appropriate but this kind of behaviour is not acceptable. Sharma should compensate for his phone from his personal income," said CK Khaitan, President, Chhattisgarh IAS Association, in a statement issued today.

Khaitan said that Sharma has already apologised for the "unfortunate incident that happened yesterday".

"He can also speak to the parents of the boy and explain. The person in the video is not a minor," he clarified further.

He stated that he understands that all collectors are over-stressed due to the pandemic situation, adding that the officer himself and his family has been suffering from COVID but IAS is such a service which means proper behaviour in all circumstances. "I have personally spoken to the officer," he added.

Khaitan informed that Sharma has also apprised about the situation to the Chief Secretary.

He further appealed to all the citizens to follow COVID appropriate behavior and stay safe unless urgent work requires travel.

In videos circulating on social media, the District Collector Ranbir Sharma is seen slapping a youth who attempts to show him a piece of paper and explain why he was outside during the lockdown. The collector then throws the youth's phone on the road and ask accompanying policemen to hit him. Sharma is heard saying in the videos "maaro ise" (beat him).

The Surajpur collector Sharma later explained that the man in the viral video had lied to officials that he was on vacation and there was no proper documentation to justify his claim and the person also misbehaved with officials.

Sharma issued a public apology for his outburst stating that his intention was never to disrespect anybody.

The man in the videos has been charged under the Epidemic Diseases Act for violating COVID-19 norms. (ANI)