BJP MP Anurag Singh Thakur was on Wednesday sworn in as a Cabinet minister and he has been given the portfolio of the Youth Affairs and Sports Ministry. 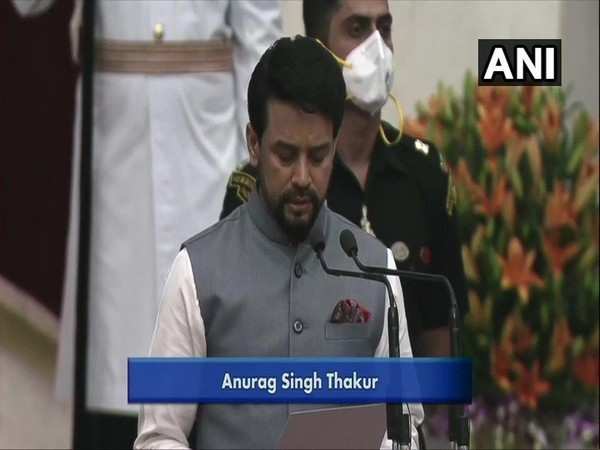 New Delhi: BJP MP Anurag Singh Thakur was on Wednesday sworn in as a Cabinet minister and he has been given the portfolio of the Youth Affairs and Sports Ministry.

Along with this, he has also been given the charge of the Information and Broadcasting Ministry. The 46-year-old MP from Hamirpur in Himachal Pradesh was among the 15 new Cabinet ministers who took oath in the first major rejig and expansion of the Prime Minister Narendra Modi government after it returned to power for a second term in May 2019.

The passing of the baton of the Sports Ministry comes just 15 days ahead of the Tokyo Olympics and Thakur would now be looking to carry forward the work done by Kiren Rijiju.

The new ministers, including 15 Cabinet ministers and 28 Ministers of State took oath at a function in Rashtrapati Bhavan in the presence of the Prime Minister and senior BJP leaders. Meanwhile, a number of ministers including Dr. Harsh Vardhan, Ravi Shankar Prasad, and Prakash Javadekar resigned.

Thakur was earlier the President of the Board of Control for Cricket in India (BCCI) and he had held the post from May 2016 to February 2017. Before that, he was also the head of the Himachal Pradesh Cricket Association (HPCA).

Rijiju, who earlier held the Sports Ministry, has now been given the charge of the Ministry of Law and Justice.

Earlier, Rijiju had become the Union Minister of Youth Affairs and Sports after the BJP-led government returned to office in the 2019 Lok Sabha polls. Over the past two years, he has been associated with several initiatives in the sports ministry including the Fit India movement.

Rijiju has articulated and worked for the goal that India wins medals at the Olympics in double digits. He has been actively encouraging the Tokyo Olympics-bound contingent.

After athletes attained qualification for the Olympics, Rijiju has always been the first one to congratulate them. Many athletes have sought Rijiju's help on social media for various reasons and the Minister has not declined their request.

While inaugurating the Narendra Modi Stadium in Ahmedabad, Rijiju had said the country is headed towards becoming a sporting powerhouse. (ANI)