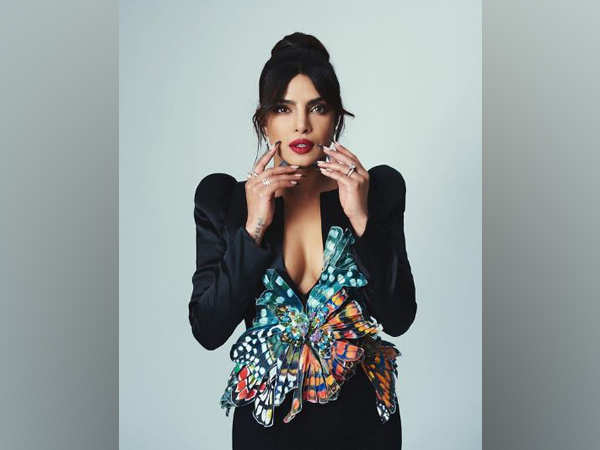 The 'Baywatch' actor took to Instagram and posted pictures in which she looked drop-dead gorgeous as the actor aced the fashion game for the prestigious event.

The pictures see the 'Isn't It romantic' actor in a fish-cut black dress with a plunging neckline that had an accentuated fabric across the waist, in the shape of a butterfly. The actor looks charismatic as she donned a minimal makeup look and aced the red lip colour. The long dress had put the actor's toned figure on display, as she seems all set to present an award at the award ceremony. The actor has tied her hair in a neat bun.

The actor left a butterfly emoticon in the caption to all the posts featuring her red carpet look.

For the unversed, the 'Fashion' star's film she has co-produced and acted in, titled 'The White Tiger', is competing in two categories.

The lead actor of the film- Adarsh Gourav- has been nominated for the best actor in a leading role. The film, also featuring Rajkummar Rao, has also received a nomination for director Ramin Bahrani in the adapted screenplay category.

On the work front, Priyanka Chopra Jonas is currently shooting for the spy series 'Citadel'. It also stars Richard Madden. The project is backed by Amazon and helmed by the Russo Brothers of 'Avengers' fame.

The actor has finished shooting 'Text for You' with Sam Heughan, Celine Dion, Russell Tovey, and Omid Djalili. Priyanka will also be seen in an Indian wedding comedy with Mindy Kaling, which she will co-produce and feature in.

She also has 'Matrix 4' and a film based on the life of Maa Anand Sheela in the pipeline. (ANI)