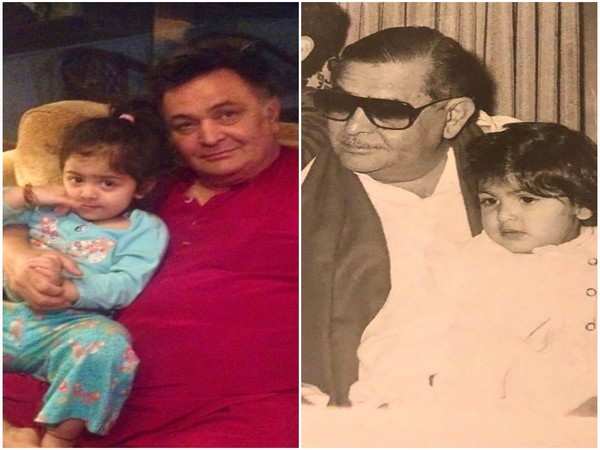 Neetu took to her Instagram handle and shared two photos on Sunday afternoon. In one of the photos, her granddaughter Samara Sahni could be seen sitting in Rishi Kapoor's lap and in another one, Neetu's daughter and Samara's mother, Riddhima, could be seen in her grandfather, Raj Kapoor's lap.

She captioned the post as, "Grandfather's loving lap @riddhimakapoorsahniofficial #circleoflife #comforting #love." More than 81,000 fans liked the post with many remembering the late stars.

Raj Kapoor, who was an actor, producer and director is widely regarded as the greatest showman in the history of Indian cinema and entertainment.

Winner of several accolades, the iconic Bollywood star was honoured with the Padma Bhushan in 1971 for his contributions to the arts. In 1987, the late actor was bestowed with the Dadasaheb Phalke Award. He later passed away on June 2, 1988.

Rishi Kapoor passed away on April 30 last year, after a two-year-long battle with leukaemia. The original 'showman' left behind a rich legacy of cinematic marvels spanning decades. He breathed his last at a Mumbai hospital at the age of 67.

Prior to his demise, Rishi was in New York for his treatment with his wife.

The couple got married on January 22, 1980, and share two children together, Riddhima and superstar Ranbir Kapoor. The couple also starred together in films like 'Zinda Dil', 'Khel Khel Mein', 'Amar Akbar and Anthony', 'Do Dooni Chaar', among several others. (ANI)