Megastar Kareena Kapoor Khan on Friday treated her fans to an adorable glimpse of how the weekend looks like at the Pataudi house. 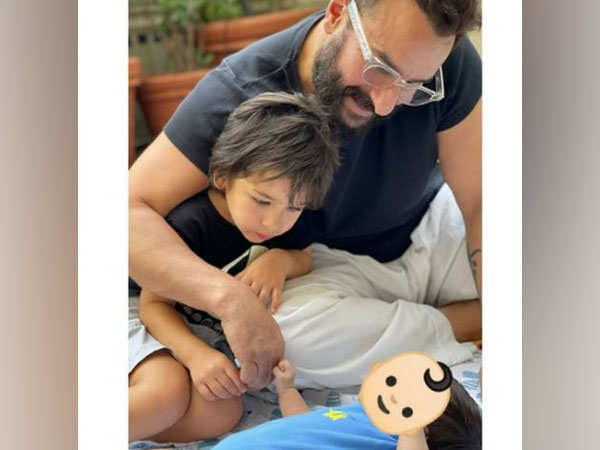 Mumbai : Megastar Kareena Kapoor Khan on Friday treated her fans to an adorable glimpse of how the weekend looks like at the Pataudi house.

The 'Good Newwz' star hopped on to Instagram to share a heart-warming picture of her newborn baby, along with her elder son Taimur Ali Khan and their father Saif Ali Khan.

The adorable picture sees the 'Kurbaan' star twinning in navy blue T-shirts with Tim Tim as the duo adorably stares at the new addition to the family. Kareena morphed the little baby's face with a baby emoticon, however, the little baby's cute little hand is seen touching papa Saif's hand. Saif and Tim Tim are seen seated close to each other as they shower love on the new member of their family.

Asking her fans how their weekend is going, the 'Jab We Met' actor wrote in the caption, "This is what my weekend looks like... how about you guys? (red heart emoticon)."

Celebrity followers including Vaani Kapoor and more than 1.8 lakh followers liked the post on the photo-sharing platform within 35 minutes of being posted.

Actors Huma Qureshi, Amrita Arora and other fans chimed into the comments section and left red heart emoticons as they praised the lovable post.

Kareena and Saif welcomed their second child, a baby boy on February 21 this year. The couple is already proud parents to a 4-year-old son, Taimur.

Kareena delivered the baby at Breach Candy Hospital in Mumbai. Extending thanks to their well-wishers, Saif in a statement at that time, said, "We have been blessed with a baby boy. Mom and baby are safe and healthy. Thank you to our well-wishers for their love and support."

The duo dated for a few years before tying the knot in October 2012. The couple welcomed their first child Taimur Ali Khan four years later on December 20, 2016.

Meanwhile, on the work front, Kareena will be next seen in 'Laal Singh Chaddha', co-starring Aamir Khan. (ANI)