Washington [US], April 26 (ANI): Ace veteran actor Anthony Hopkins took home the Oscar for 'Best Actor' for his powerful performance in 'The Father'. 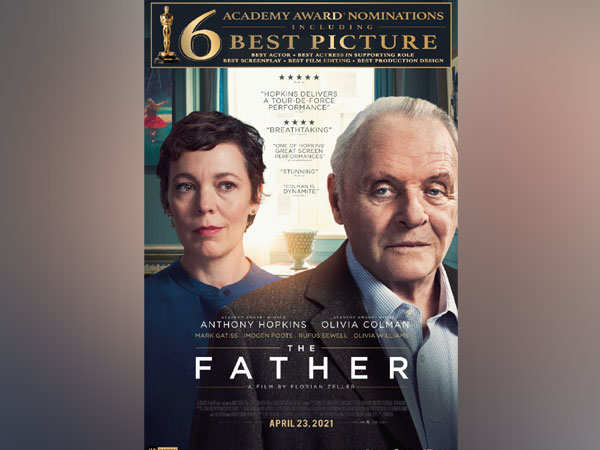 Washington [US], April 26 (ANI): Ace veteran actor Anthony Hopkins took home the Oscar for 'Best Actor' for his powerful performance in 'The Father'.

This is the second time that Hopkins has won an Oscar in the Best Actor category. Earlier he had won the award for his role of Hannibal Lecter in 'The Silence of the Lambs'.

This victory has now made Hopkins the oldest ever Oscar winner. Hopkins didn't pick up his award in person at the 93rd Academy Awards, reported People magazine.

In the film, protagonist Anthony (Hopkins) interacts with daughter Anne (Colman) and other characters who give him conflicting accounts of the past and present. Like Anthony, the audience has to solve the puzzle of what's real and whose truth should be believed.

The Florian Zeller directorial, which is an adaptation of his 2014 play, has collected six Oscar nominations this year.

Earlier in the ceremony, 'Nomadland' bagged the award 'Best Picture'. This was the second win for 'Nomadland' at the 93rd Academy Awards as earlier Chloe Zhao took home the Oscar for best direction, becoming the first person of colour to bag this award. She is only the second woman in the history of the Academy Awards to win this particular laurel.

British actor Daniel Kaluuya took home the Oscar for Best Actor in a Supporting Role, for his performance in the 'Judas and Black Messiah'.

Denmark's 'Another Round' won an Oscar for 'Best International Feature Film'.

Christopher Hampton and Florian Zeller took home an Oscar in the category of Adapted Screenplay for their work in the Anthony Hopkins-starrer 'The Father'. Emerald Fennell also won an Oscar for Original Screenplay for the comedy thriller film 'Promising Young Woman'.

The 93rd Academy Awards are being held at both the Dolby Theatre and Union Station. The ceremony is taking place two months later than originally planned, due to the impact left by the COVID-19 pandemic on the entertainment industry.