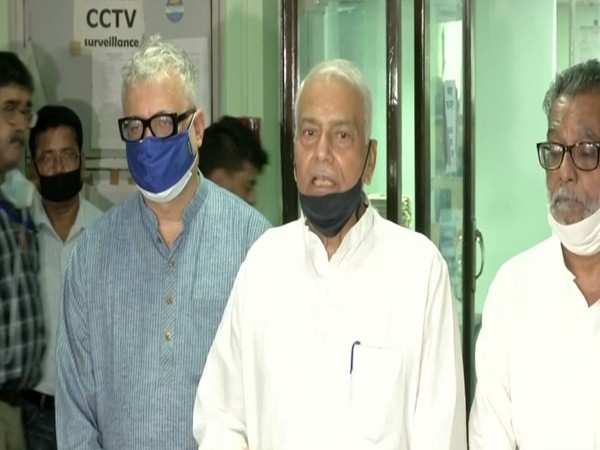 Speaking to the media, Sinha said: "We met the EC to register a complaint that a day before the elections, the BJP released a so-called tape of the West Bengal CM and it is clear that this is the result of BJP's dirty tricks department. It is released just a day before voting to influence voters."

He further informed that the big question raised before the Commission was who was taping the conversations of the Chief Minister.

"I have been a minister and I wanna say that there is a proscribed procedure even for recording the conversations of a criminal," he said.

Meanwhile, Basu told the media: "We have conveyed to the EC that is an act of wrongdoing. If this way the audiotape of a Chief Minister is released, this is a very bad thing. We have asked for an appropriate investigation in this matter, and adequate punishment should be given."

Prior to this, the delegation also wrote a letter to the state Chief Electoral Officer (CEO) accusing the BJP of illegally recording a conversation between Banerjee and Ray.

"In the said conference, it has been alleged that in the aftermath of the CISF firing incident at Sitalkuchi, Mamata Banerjee had a conversation with Partha Pratim Ray. The BJP has not only illegally recorded and/or caused it to be recorded, but also played it at the press conference out of context. The entire exercise by the BJP is an illegal act and is a direct assault on legal rights, including the Right to Privacy of Mamata Banerjee and Partha Pratim Ray," the TMC delegation said.

Polling is underway in a total of 45 constituencies covering the districts of Jalpaiguri, Kalimpong, Darjeeling and a segment of Nadia, North 24 Parganas and Purba Bardhaman in the fifth phase. A total of 319 candidates, including 39 women are in the fray in Phase-V.

There are 15,789 polling stations designated for this phase. The security for this phase has been beefed up with the deployment of 1,071 companies of central forces for ensuring a peaceful election.

The voting for the sixth phase will be held on April 22. (ANI)