New Delhi [India], May 18 (ANI): The India Meteorological Department on Tuesday said that the eye of cyclonic storm Tauktae, which had hit the Gujarat coast in Saurashtra has ended and the eye of Cyclone Tauktae is disorganizing. 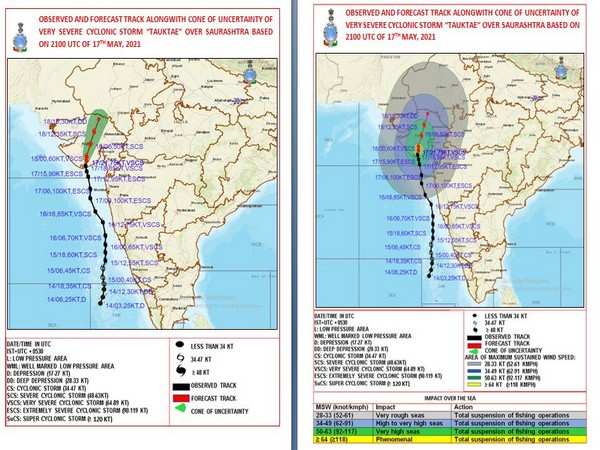 New Delhi [India], May 18 (ANI): The India Meteorological Department on Tuesday said that the eye of cyclonic storm Tauktae, which had hit the Gujarat coast in Saurashtra has ended and the eye of Cyclone Tauktae is disorganizing.

As the Indian Navy and NDRF continue to remain vigilant and carry out rescue operations along the Western coast, the IMD tweeted, "The VSCS 'TAUKTAE' lay centred at 0430 HRS IST of 18TH MAY 2021 over SAURASHTRA, near LAT. 21.40°N AND LONG. 71.20°E, about 85 KM north-northeast of Diu and 20 KM south of AMRELI. The cyclone continues to show weakening trend. Eye is disorganising, wall cloud is weakening."

Following the effects of the cyclone, many parts of Northern India including Haryana, Uttar Pradesh and Rajasthan will witness rainfall.

As Cyclone Tauktae continues to impact several states on the Western Coast including Gujarat, damaging structures, electricity lines, and uprooting trees, the India Meteorological Department on Tuesday informed that the cyclone is continuing to show a weakening trend.

Rain and gusty winds seen in Una town of Saurashtra near Diu, at midnight today.

Patients from a COVID care centre in Gujarat's Vadodara were shifted to hospitals, yesterday. Nodal Officer Sheetal Mistry said, "In view of IMD's warning for Cyclone Tauktae, we are shifting COVID-19 patients from various facilities to hospitals."

Also, the road between Gujarat's Somnath district and the Union Territory of Diu (Daman & Diu) which was blocked due to fallen trees, has been cleared by the Army personnel for movement of vehicles.

NDRF team too cleared the road of fallen trees and branches in Dahisar area of Mumbai.'Extremely' Severe Cyclonic Storm, Tauktae is now weakening into a 'Very' severe cyclonic storm, as per the India Meteorological Department on Tuesday.

A powerful cyclone has battered country's west coast and made landfall in Gujarat on Monday night and the process is likely to continue for three hours, confirmed the India Meteorological Department (IMD) as authorities evacuated thousands of people.

The Railways Ministry on Monday said that it is taking all the measures to face the cyclonic storm Tauktae and vulnerable areas and important bridges are being constantly monitored by its engineering wing.

According to a statement issued by the ministry, all zonal and divisional controls are monitoring the situation and constantly in touch with all the railway stations in Southern Railway, South Western Railway, Konkan Railway, Central Railway and Western Railway. As many as 11 Indian Navy Diving Teams have been kept on standby and 12 flood rescue teams and medical teams have been earmarked for immediate response and deployment keeping in view of the cyclonic storm Tauktae.

Union Defence Minister Rajnath Singh held a meeting to review the preparedness and assistance being provided by the Armed Forces to civil authorities to tackle the situation arising out of Cyclone Tauktae.

According to a statement issued by the Ministry of Defence, during the meeting, Singh was informed that 11 Indian Navy Diving Teams have been kept on standby in case of any request from authorities of affected states. (ANI)