Jaipur (Rajasthan) [India], May 28 (ANI): Chief Minister Ashok Gehlot on Thursday annouced that Rajasthan Government has approved Saint Gobain's proposal to invest worth Rs 1,200 crore in state and assured the company officials that the state government will provide the best cooperative environment and support for the investment and future plans. 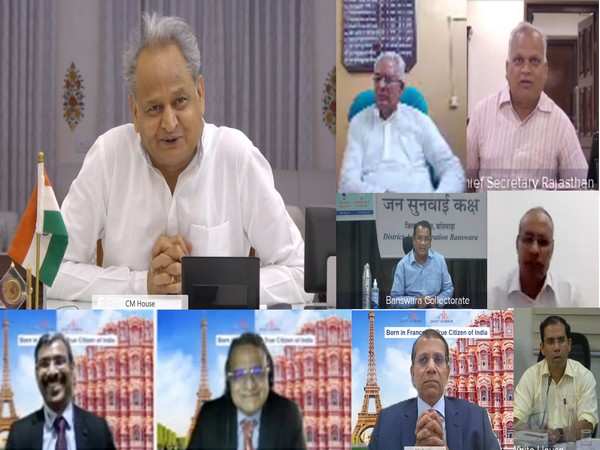 Jaipur (Rajasthan) [India], May 28 (ANI): Chief Minister Ashok Gehlot on Thursday annouced that Rajasthan Government has approved Saint Gobain's proposal to invest worth Rs 1,200 crore in state and assured the company officials that the state government will provide the best cooperative environment and support for the investment and future plans.

"Addressed the meeting along with St. Gobain, the world's leading glass manufacturer in connection with the proposal to expand investment in the State via video conferencing. With the efforts of the state government,"Gehlot said in a series of tweets that company officials held a meeting with the Chief Minister Ashok Gehlot to present the investment plan and requested for incentives and assurance for support under the state policy framework.

"Saint Gobain is a renowned industry of the world. When it is choosing the state for its second major investment, it shows its trust in the state. There cannot be a better promotion of the state investment scenario than this," he said.

He further assured to Saint Gobain that the state government will provide the best cooperative environment and support for proposed and future investments.

B Santhanam, Chairman, Saint-Gobain Group in India, said, "In line with our strategy for accelerated growth in India, Saint-Gobain will invest in a new float glass plant in our world glass complex, Bhiwadi. Rajasthan is the ideal state for this investment as it has abundant availability of raw materials, an excellent talent pool and most importantly a progressive and dynamic Government. This new investment of around Rs 1,200 crore would help us to produce advanced and value-added products for the growing construction and automotive markets in India."

Emphasising that Rajasthan is emerging as the most favorable state for investment, the Chief Minister said,"Proposal to invest around Rs 1,200 crore at a plant in Bhiwadi in Rajasthan by a reputed company like Saint Gobain proves that there is trust among international companies in Rajasthan."

"Along with the government's policy decisions to ensure better law and order situation, good roads, self-sufficiency in energy, availability of sufficient raw materials, strong infrastructure; the world's leading companies are showing interest in investing in Rajasthan. The government will also encourage industries in State", the Chief Minister added.

For the last two years, Rajasthan has been successfully attracting investments due to its very attractive industry policy framework, despite having a focused fight against Covid-19. "The state has successfully attracted investment proposals over Rs 1,50,000 cr under various thrust sectors such as Green Energy, IT, Startups, Electronics, Glass manufacturing, Fabric and Textile, Bathware, Earth Moving, Medical and Health, Ceramic, Mines and Minerals, etc", informed an official release.

Notably, Rajasthan is the sole producer of Zinc and Lead in India, the largest producer of Marble, Limestone, and Sandstone, the largest reserve for granite, potash, and Felspar, the second largest mineral producing state in value. The state has a supply of Natural Gas in 18 Districts which is benefiting ceramics, Glass, and other gas-based industries.

Foundation for Saint-Gobain's World Glass Complex was laid in 2010 by Chief Minister Ashok Gehlot. Since then Saint-Gobain has invested more than Rs 1200 crores over the years. (ANI)