MATUNDA, Kenya — A luminous presence in Matunda Soy, Kenya, the first local Bahá’í House of Worship in the continent of Africa was dedicated at an opening ceremony Sunday morning.

The chorus of “Make my prayer, O my Lord, a fountain of living waters” sung by a local choir resonated deeply within the people who had gathered at the dedication ceremony, and represented thousands of people nearby and across Kenya celebrating a momentous step in the spiritual journey of their people.

The House of Worship—referred to in the Bahá’í writings as a Mashriqu’l-Adhkár, meaning “Dawning-place of the Praise of God”—has a unique reality. It stands at the heart of the community, is open to all peoples, and is a place where prayer and contemplation inspire service to society.

An aerial view of the local Bahá’í House of Worship in Matunda Soy, Kenya.

Sunday’s opening ceremony included remarks from Townshend Lihanda, a member of the Continental Board of Counsellors in Africa whom the Universal House of Justice named as its representative to the event. Mr. Lihanda read a letter of the House of Justice addressed to the gathering, which stated: “…at a time when the world is caught in the midst of uncertainty, the efforts of the friends throughout Matunda Soy and beyond have culminated in the raising of this beacon of hope, a cause for jubilation and great joy.”

The Universal House of Justice stated that the completion of the project in just three years and under difficult circumstances “is a testament to the vitality, resourcefulness, and determination of the Kenyan people.” 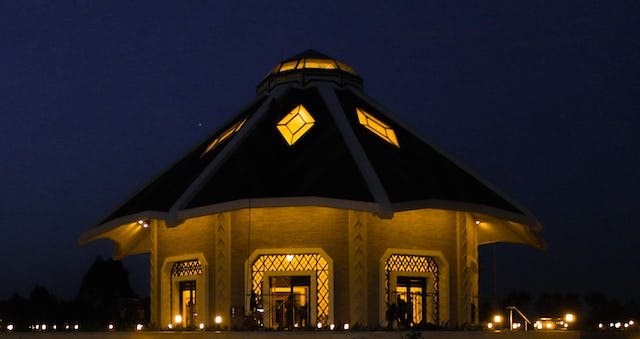 A night view of the local Bahá’í House of Worship in Matunda Soy, Kenya. The House of Worship has a unique reality. It stands at the heart of the community, is open to all peoples, and is a place where prayer and contemplation inspire service to society.

Mourice Mukopi, the chief of the group of villages where the temple is located, said, “The most important thing about the Bahá’í temple is that it welcomes everyone from different religions to come and worship.” 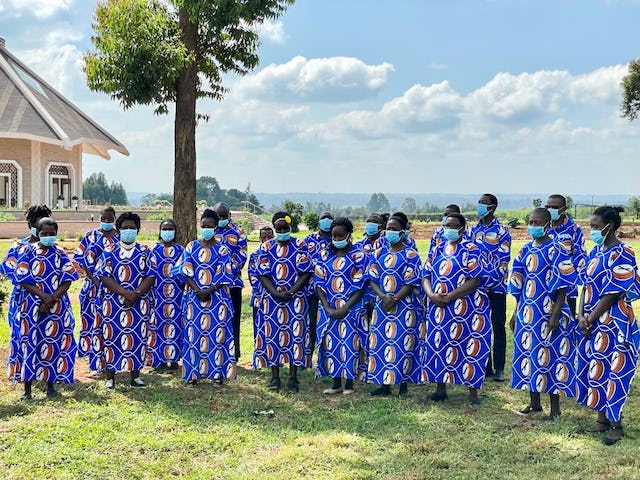 In speaking with the Bahá’í World News Service, residents of the area have echoed these sentiments. “The people of Matunda Soy see the House of Worship as a sign of unity,” says Andrew Juma.

Elder Khaemba, another member of the local community, states: “The differences that existed before are over, since people of all faiths come together in prayer at the temple.”

A village elder, Justus Wafula, states: “The House of Worship is a space where the negative forces of society have no place. When we go to the temple, we know that we are on the right path. We know that we are home.” 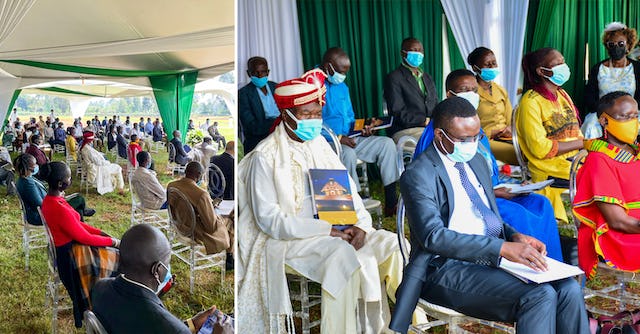 Some one hundred participants attended the dedication ceremony, while thousands of people nearby and across Kenya celebrated a momentous step in the spiritual journey of their people.

The sense of home created by the appearance of the temple is reminiscent of the traditional huts of the region, explains Neda Samimi, the House of Worship’s architect. “A place of worship is a place where your soul belongs, where you should feel comfortable whatever your religion and be able to connect and commune with your Creator.”

Mrs. Samimi describes how the process of raising the temple was unifying.

“Everyone who has been involved in the project has been very conscious that this structure is dedicated to the promotion of oneness and the praise of God. All our work has been carried out through consultation, and our meetings would begin with prayers from diverse faiths.” 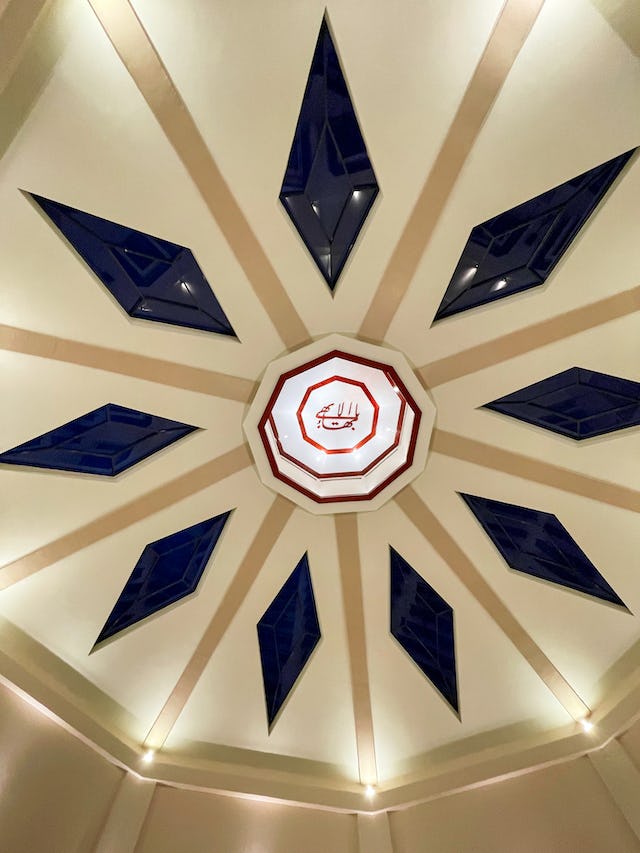 A sacred Bahá’í symbol known as the Greatest Name has been placed at the apex of the dome. The Greatest Name is a calligraphic representation of the invocation “O Glory of the All-Glorious.”

Construction came to a close this month with two significant events. A sacred Bahá’í symbol known as the Greatest Name was raised to the apex of the dome.

Then, on Saturday, a small ornamental case containing dust from one of the Holy Shrines at the Bahá’í World Centre was placed within the structure of the House of Worship, symbolizing the profound connection between the temple and the spiritual center of the Bahá’í Faith.

John Madahani, a member of the Bahá’í Local Spiritual Assembly of Matunda, explains how Bahá’í community life in the region has evolved since its origins in the 1970s. “In the past, only a few Bahá’ís would gather in their homes for prayers. Now more than 300 families regularly hold devotional gatherings, praying with their neighbors, welcoming all without asking what religion one is from. 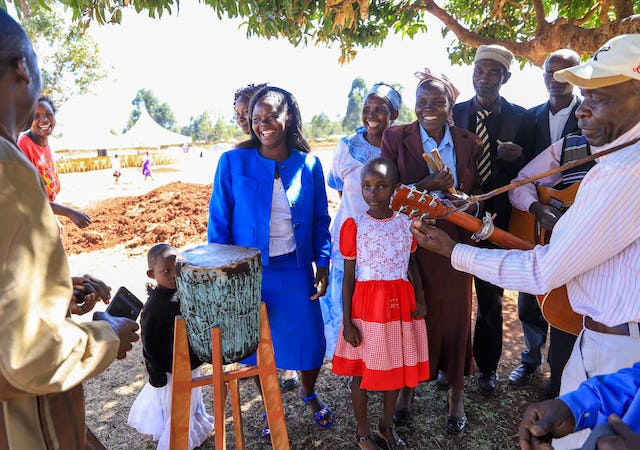 Photograph taken before the current health crisis. Residents of Matunda Soy gathered at the groundbreaking ceremony for the temple construction project in March 2019.

“And when we started the practice of gathering on the temple grounds early in the morning before construction began, we saw how powerful it was for all members of the community to have such a moment together before going about their daily tasks. Otherwise we would never see workers and farmers, youth and parents together at once.”

Bernard Liyosi, another member of the Local Assembly, says, “The House of Worship brings us closer to God through both worship and service. We receive energy from gathering at the temple, energy that we channel into building stronger communities.” 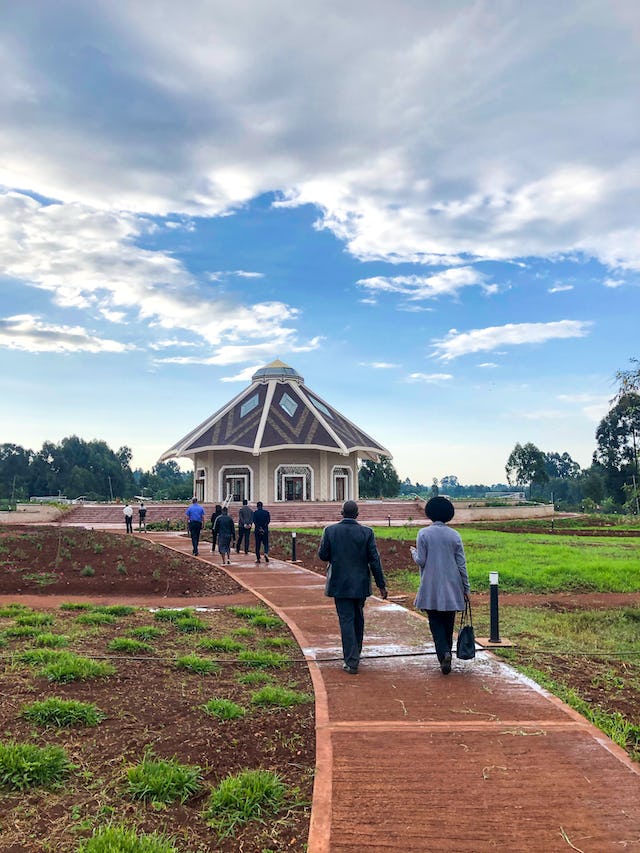