Baháʼís Commemorated 129th Anniversary of the Ascension of  Bahá'u'lláh 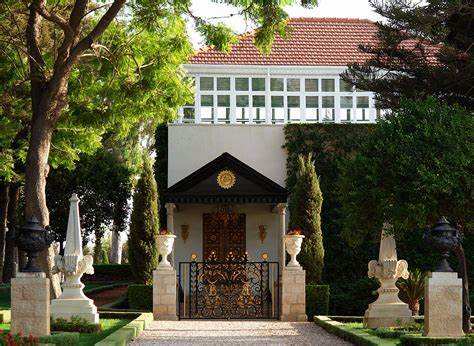 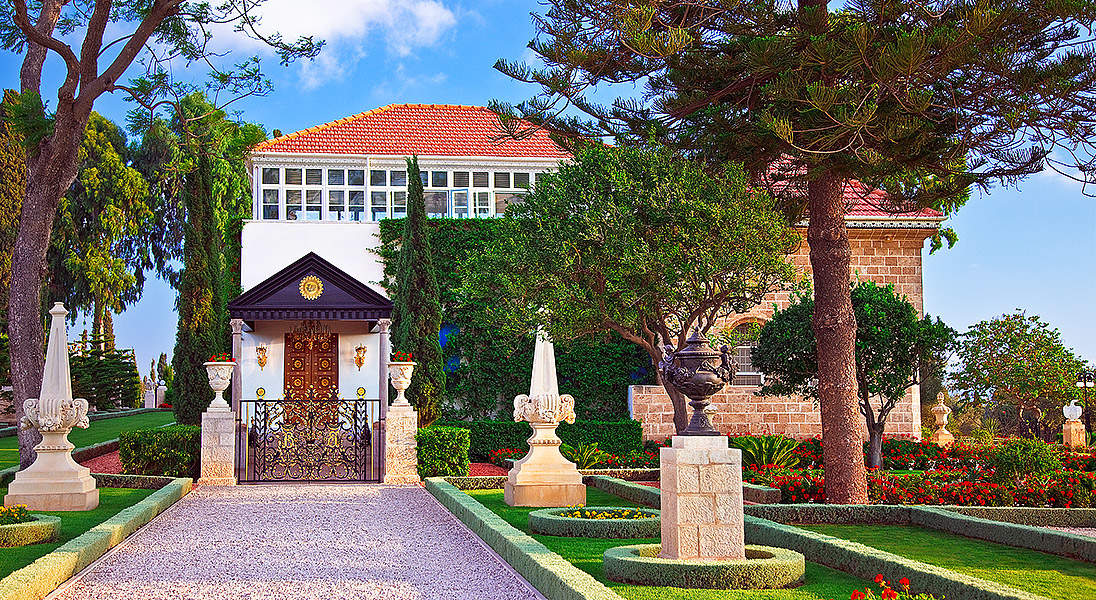 The Mansion of Bahjí (Arabic: Qasr Bahjí, mansion of delight) is a summer house in Acre (Akka), Israel where Bahá'u'lláh, the Prophet-Founder of the Baháʼí Faith, before dawn, passed away at 3:00 a.m. on May 29, 1892 in the Mansion of Bahjí. His shrine is located next to this house. The whole area was called Al-Bahjá (Place of Delight). Baháʼí Communities worldwide therefore gather at that time (3:00 a.m.) to commemorate the Ascension of Bahá'u'lláh with Baháʼí prayers and scriptures, usually culminating in the chanting in Arabic, or recitation in translation, of what is known as the  “Tablet of Visitation,” a special prayer reserved for the commemoration of Bahá'u'lláh, as well as the Báb.

A telegram bearing the news, “ The Sun of Baha´’ has set,” was immediately dispatched by ‘Abdu’l-Baha´ (1844–1921), Bahá'u'lláh's eldest son and Successor), toSult˙a´n ‘Abdu’l-Hamı´d, with a request for permission to bury Bahá'u'lláh at Bahjı´, which was granted. Bahá'u'lláh was interred shortly after sunset, on the very dayof His ascension. 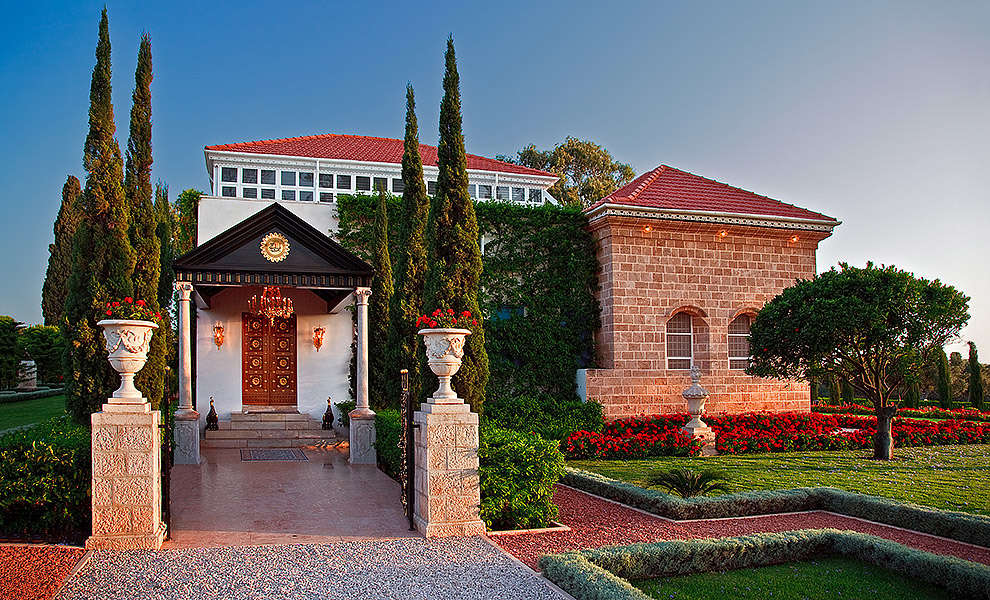 Where the sacred remains of Bahá'u'lláh are interred is now known as the Shrine of Bahá'u'lláh—a building that, in 2008, was designated a UNESCO World Heritage Site along with the Shrine of the Báb, making these two Baháʼí´ sacred sites the first modern religious edifices to be so distinguished. By virtue of their outstanding  value to humanity, World Heritage Sites belong to all the peoples of the world.

Of far greater moment, however, is Bahá'u'lláh's contribution to a future world heritage of global  unity and world peace, culminating in a Golden Age envisioned and promised by Bahá'u'lláh Himself. One example of this promise appears in Cambridge scholar Edward Granville Browne’s historic meeting with Bahá'u'lláh, in 1890:
"Thou hast come to see a prisoner and an exile. ... We desire but the good of the world and the happiness of the nations. ... That all nations should become one in faith and all men as brothers; that the bonds of affection and unity between the sons of men should be strengthened; that diversity of religion should cease, and differences of race be annulled—what harm is there in this?
... Yet so it shall be; these fruitless strifes, these ruinous wars shall pass away, and the “Most Great Peace” shall come. ... These strifes and this bloodshed  and discord must cease, and all men be as one kindred and one family. Let not a man glory in this, that he loves his country; let him rather glory in this, that he loves his kind. (Browne, A Traveller’s Narrative, xl). 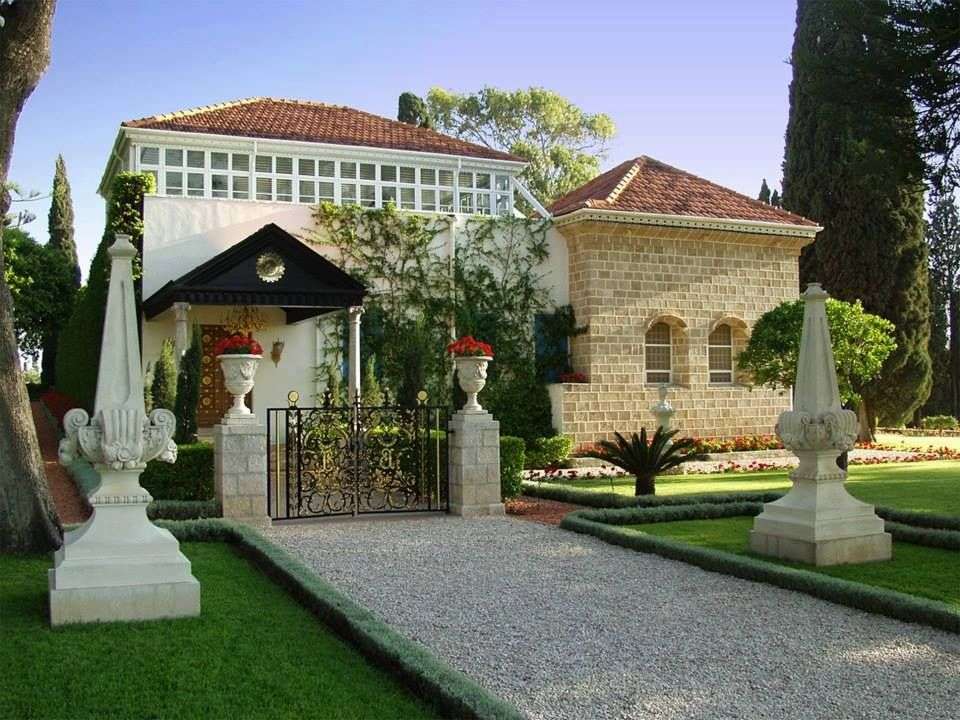 After the ascension of Bahá'u'lláh, His eldest son ‘Abdu’l-Baha´ became the appointed “Centre of the Covenant” (successor to Bahá'u'lláh), pursuant to provisions of
Baha´’u’lla´h’s Most Holy Book and the Kita´b-i-‘Ahd (“Book of the Covenant”), which is Bahá'u'lláh’s last will and testament, written entirely in his own  hand. Nine days after Bahá'u'lláh’s ascension, this singularly important document was shown to the local Baháʼís and read in their presence.

In Persia, Baha’u’llah was imprisoned in between the months of August and December 1852 in the Siyah-Chal (Black Pit), an underground dungeon, which was one of the most notorious dungeons in Tehran. Bahá'u'lláh claimed that here He had a vision of a Maid of Heaven, through whom He received His mission as a  Messenger of God and as the One whose coming the Báb had prophesied.

Bahá'u'lláh's passing followed nearly 40 years of exile from His native Iran, first in Baghdad and later in Turkey before His incarceration in Acre in 1868.

Bahá'u'lláh revealed more than 100 volumes of divinely inspired mystical writings, ethical and social teachings, and laws and ordinances. He also addressed the kings and rulers of His day, including the Shah of Persia, the Sultan of Turkey, Pope Pius IX, Kaiser Wilhelm I of Germany, Queen Victoria, Emperor Franz Joseph of Austria, Napoleon III, and the heads of governments in the West, informing them of the Revelation He bore. He exhorted them to govern their subjects with justice and compassion, and He warned them that if they did not, power would pass from their hands.

Throughout the world’s religious history, the death of the Founder has typically precipitated a crisis over successorship. The Ascension of Bahá'u'lláh, however,
was immediately followed by the succession of ‘Abdu’l-Baha´ as head of the Baháʼí Faith, as authorized “Interpreter” of Bahá'u'lláh's teachings, and as the “Perfect Exemplar”  of Baháʼí virtues. This clear transition, ordained in Bahá'u'lláh’s written Testament, preserved the integrity of the Baháʼí Community and protected it from the perils of schism.

Baháʼís may individually or collectively commemorate the Ascension of Bahá'u'lláh with prayers and readings as befit the occasion, often followed by refreshments  and fellowship in a dignified manner. Among the Baháʼí readings,of special relevance to this occasion include: Nabı´l’s account of the ascension of Bahá'u'lláh; the Tablet of Visitation of the Báb and Bahá'u'lláh; the “Book of the Covenant”  (Bahá'u'lláh’s last Will and Testament, appointing ‘Abdu’l-Baha´ as successor); passages in the Kita´b-i-Aqdas relating to the succession of ‘Abdu’l-Baha´; the “Tablet of the Branch”; and ‘Abdu’l-Baha´’s first message to the Baháʼís, announcing Bahá'u'llá's ascension, advising Baháʼís not to be disconsolate, and to remain steadfast. 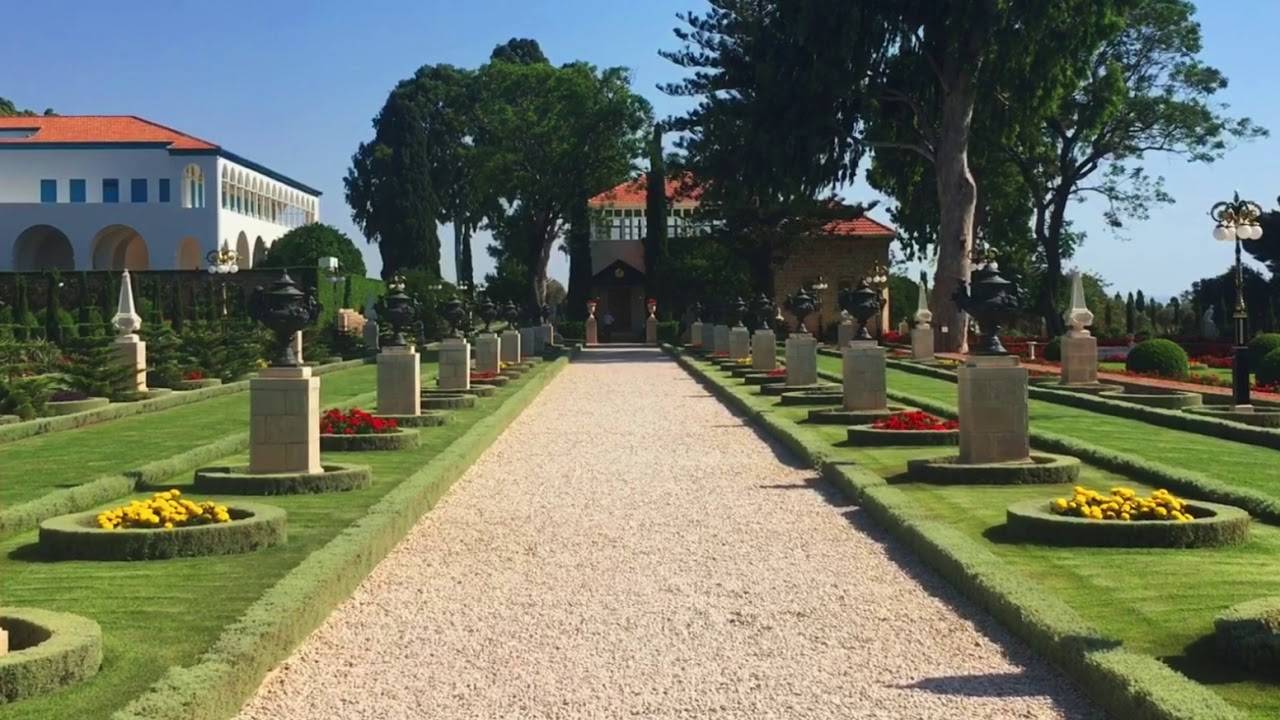 The Ascension of Bahá'u'lláh is of special moment, commemorating the life and contributions of a great religious figure in modern history, whose shrine has been  designated a UNESCO World Heritage Site, and whose universal principles of world unity  may, in the course of time, be recognized as an enduring contribution to the world’s heritage.

Repeatedly persecuted, exiled, jailed and tortured for His progressive teachings, Bahá'u'lláh passed a way at the age of 74 years, 6 months and 17 days.

Born in 1817, Bahá'u'lláh became the Prophet and Founder of the Baháʼí Faith in 1863—and then spent the rest of His life in exile and prison as a result of those teachings.

His son 'Abdu’l-Baha, who would lead Bahá'u'lláh’s Faith after His passing, summarized His father’s life this way:

Thrown in Tehran’s notorious Black Pit, His land and possessions seized, then forced out of Persia by its government, Bahá'u'lláh was successively banished to Baghdad in 1852; then from Baghdad to Constantinople in 1863; then to Adrianople (now Edirne) in 1867; and finally to the prison-city of Akka in Palestine (now Israel) in 1868.

Baha’u’llah ultimately spent the rest of His adult life as a prisoner of conscience.

He taught a new Faith with remarkably progressive principles: the independent investigation of truth, the unity of all religions, the oneness of God and humanity, the establishment of a global democratic order, the agreement of science and religion. Bahá'u'lláh’s new Faith challenged dogma and orthodoxy by doing away with clergy, outlawing racial prejudice, establishing the equality of women and men, and demanding that the world’s rulers reduce their armaments and agree to establish peace.

Despite continuing government-sponsored campaigns aimed at Baha’is, and despite the passing of Baha’u’llah, the Baháʼí Faith continues to grow, develop and prosper in every corner of the planet.

Bahá'u'lláh’s teachings still emphasize peace, unity and harmony among all people. They have inspired millions around the world, and the Faith that Bahá'u'lláh revealed so long ago has joined the pantheon of the world’s major Faiths as a result.

So today Baha’is around the world will gather during the darkest part of the night to observe and commemorate the anniversary of the passing of Bahá'u'lláh, and the dawning of his new, light-filled revelation. In those solemn and prayerful occasions that will happen tonight across the planet, Baha’is and their friends and loved ones will reflect on the powerful teachings of this relatively new global Faith and remember the extreme sacrifices that brought its message of unity to humanity. They will remember that Baha’u’llah said he: 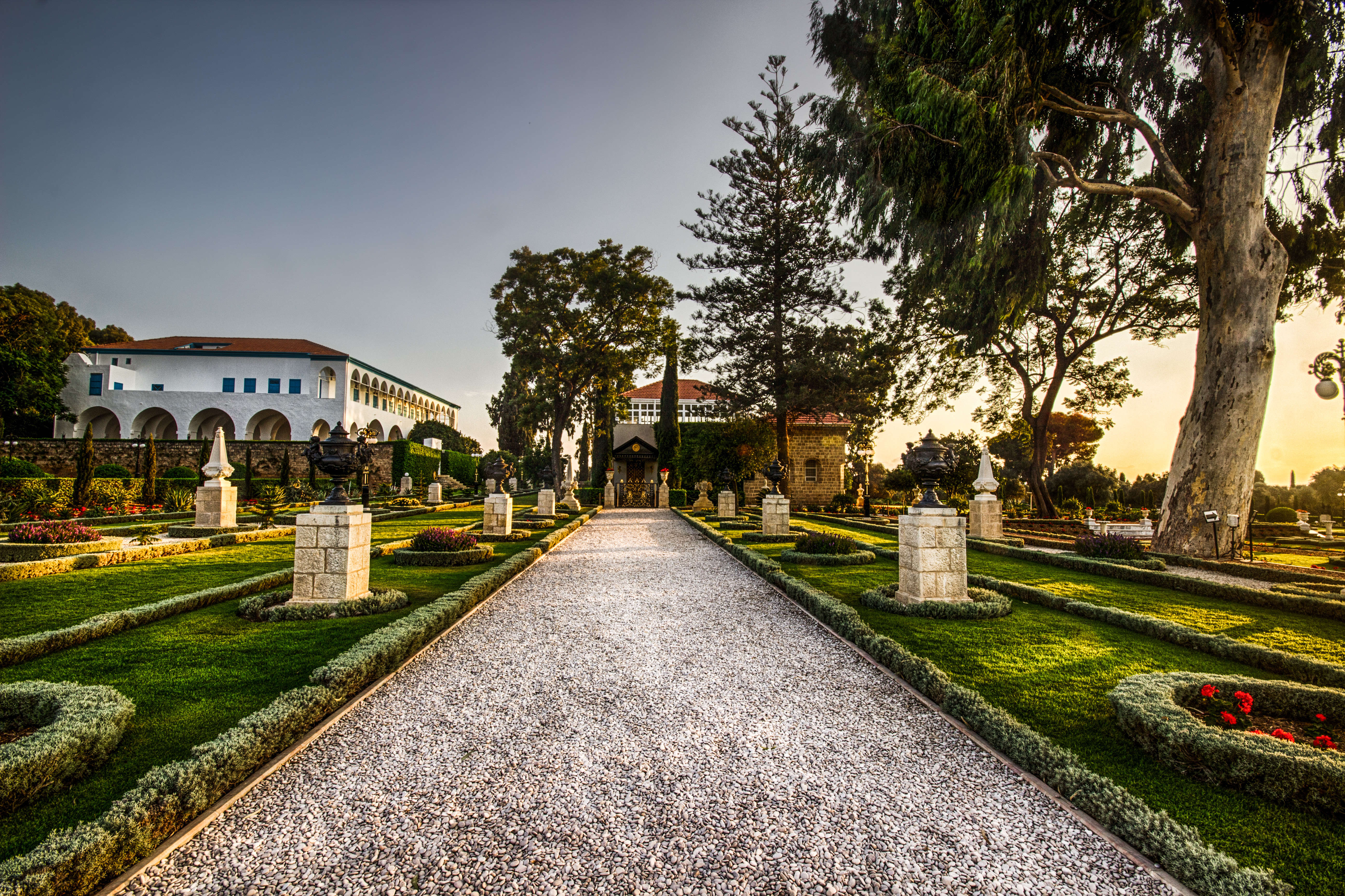 … hath consented to be bound with chains that mankind may be released from its bondage, and hath accepted to be made a prisoner within this most mighty Stronghold that the whole world may attain unto true liberty. He hath drained to its dregs the cup of sorrow, that all the peoples of the earth may attain unto abiding joy, and be filled with gladness. This is of the mercy of your Lord, the Compassionate, the Most Merciful. We have accepted to be abased, O believers in the Unity of God, that ye may be exalted, and have suffered manifold afflictions, that ye might prosper and flourish. - (Bahá'u'lláh, Gleanings from the Writings of Baha'u'llah, pp. 99-100.)

Throughout history, the great religions have provided the primary driving force behind the civilizing of human character, eliciting self-discipline, devotion and heroism from their followers. Many of religion’s moral principles have been translated into structures and patterns of conduct which have served to elevate human relationships and advance humanity’s collective life.

Every time a Manifestation of God appears, a fuller measure of inspiration for the next stage in the awakening and progress of humanity is released into the world. A human being—ordinary in every outward respect—is called to be a mouthpiece for God. One may call to mind Moses standing before the Burning Bush, the Buddha receiving enlightenment under the Bodhi tree, the Holy Spirit descending upon Jesus in the form of a dove, or the archangel Gabriel appearing to Muhammad.

In the middle of the 19th century, God summoned Bahá’u’lláh—meaning the “Glory of God”—to deliver a new Revelation to humanity. For four decades thousands of verses, letters and books flowed from His Pen.

In His Writings, He outlined a framework for the development of a global civilization which takes into account both the spiritual and material dimensions of human life.

Although He brought a new message of peace and acceptance to the world, Bahá'u'lláh was under house arrest when He became ill.
Bahá'u'lláh knew that He was going to be departing from this world, and so six days before He died, He called His followers to Him so that He could give them one final message. He instructed them to be united, even after His passing, and to continue working and worshipping as He had taught them to do. After He died, the mourning of His followers continued for over a week and people from other Faiths, such as Christians, Jews, and Muslims joined them, recognizing the loss of a great man.

During this holiday, celebrants abstain from attending work and school, and celebrate the amazing life that formed their Faith. The exact moment of Bahá'u'lláh’s death at The Mansion of Bahjí is remembered at 3 am, and His sufferings are reflected on during the whole day. This day is seen as a time to read through Baha’u’llah’s writings, to better understand His vision for the world. Remembering the day that Baha’u’llah died is incredibly important for those of Baháʼí Faith, especially those that are currently living under persecution for their believes, just as Bahá'u'lláh did. By gaining a better understanding of how Bahá'u'lláh was able to love those that treated Him badly, and remained at peace throughout all of His sufferings, Baha’is attempt themselves to reach this peaceful state.

Today, His life and mission are becoming increasingly well-known across the planet.
Millions of people are learning to apply His teachings to their individual and collective lives for the betterment of the world.